‘We pushed propaganda to get Trump out of office,’ CNN staffer spills the beans in an undercover video 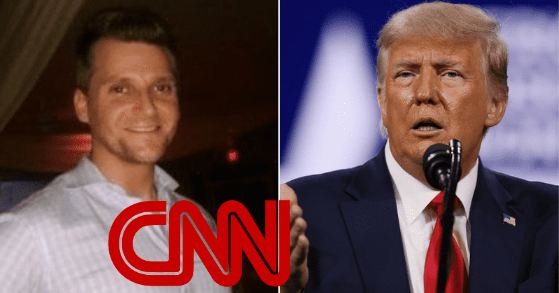 In a secretly filmed video by Project Veritas, a CNN employee revealed that his network produced “propaganda” to oust former President Donald Trump during the 2020 presidential election — and boasted about their performance. Throughout the 2020 presidential election, it became evidently clear that there is a big nexus at work to get a Democrat President into the White House. CNN’s technical director could not keep shut over CNN’s ‘achievement’ in getting Trump out and spilled the beans.

Project Veritas filmed Charlie Chester, a technical director at the cable network, as he discussed how they “got Trump out” of office during a series of phoney Tinder dates. He said, “Look what we did, we [CNN] got Trump out. I am 100​ percent going to say it, and I 100​ percent believe that if it wasn’t for CNN, I don’t know that Trump would have got voted out. Our focus was to get Trump out of office, right? Without saying it, that’s what it was.” Chester added that he came to work at CNN because he ​​”wanted to be a part of that.”

By bringing in medical professionals, they overdramatized Trump’s health problems, according to Chester. He said, “[Trump’s] hand was shaking or whatever, I think. We brought in so many medical people to all tell a story that was all speculation – that he was neurologically damaged, and he was losing it. He’s unfit to – you know – whatever. We were creating a story there that we didn’t know anything about. I think that’s propaganda.”

When asked whether he and CNN were worried about Joe Biden’s health during the election, Chester responded that the network was. ​“Showing him jogging is obviously deflection of his age and they’re [CNN] trying to make it like, ‘Oh, I’m healthy,’” Chester said.

The date asked: “What do you mean?”​ To which Chester replied, “We would always show shots of him [Biden] jogging and that [he’s] healthy, you know, and him in aviator shades. Like you paint him as a young geriatric.”

Chester discussed how CNN targeted anti-Trump voters by concentrating on climate change during one of his meetings with his “date,” adding that “fear sells.” He went on about CNN setting up further propaganda saying that he believed COVID fatigue exists. And as a result, if a new story emerges, they’ll [CNN’s] grab onto it. They’ve already declared in our office that once the public is open to it, we’ll start working on climate,” Chester said.

“It will be our [CNN’s] primary goal. Isn’t it as if our main goal was to get Trump out of office? Isn’t that what it was, without saying it? So our next move will be to raise concern about climate change,” he said.

According to Mediaite, a source close to CNN said Project Veritas targeted Chester through the dating app Tinder because his profile mentioned he worked at CNN. The Project Veritas employee, who claimed to be a nurse and was not named, went on five dates while wearing a wire, the last of which was at a coffee shop in Chester’s neighbourhood. It’s unknown when the events occurred.

Chester told his “date” that if Biden died, he wouldn’t mind because Vice President Kamala Harris is “f—ing real.” He said, “I had so many arguments about, like — my dad would be like, ‘You’re, you know, you’re voting in Kamala Harris because he’s going to die in the presidency. And I’m like, ‘He’s not going to f—ing die.’ But I’m OK with that. I’m OK with that. She probably could be a b—h in, like, a board meeting, and you’d hate her as a boss, but she’s f—ing real, and better than what we got regardless.”

An explosive news story about Hunter Biden and his laptop was broken at the height of the US Presidential election’s drama. The Hunter Biden laptop report of 2020 was overlooked by CBS, ABC, NBC, CNN, The Washington Post, The New York Times, and other news organisations. These are some of the most widely read and watched national news outlets in the United States, and they all agreed that a possible President’s son’s collusion with foreign forces when using his name was unimportant.

CNN has made its love for President Joe Biden and hatred for Donald Trump very clear. CNN election expert Wolf Blitzer was overawed seeing visuals of Trump leaving Washington DC, and even took to calling the limited number of spectators and fans gathered at Joint Base Andrews to bid farewell to the outgoing President as “a little pathetic, a tiny little crowd.”

Senior journalists at CNN made no secret of their total and submissive love for President Joe Biden. CNN also relentlessly reported a fake story of the Biden administration starting the entire American vaccine distribution plan from ‘scratch’, as there was absolutely nothing which the previous administration left for them to work on. Such was the falsity of this story that Biden’s White House adviser Dr Anthony Fauci was himself forced to debunk it, saying, “We certainly are not starting from scratch because there is activity going on in the distribution.” The fake story was run by CNN no less than 47 times.

Project Veritas has once again got the CNN in its sights. Chester’s unapologetic claims of pushing propaganda solely to get Trump voted out, is out in the open. Project Veritas has recurrently exposed them for their wrongdoings and there still is a lot to uncover.

Germany’s Indo-Pacific strategy is supposed to counter French influence, but Japan has come up with a loyalty test for Merkel

As Biden remains indifferent towards Taiwan, Australia and Japan could go to war with China in next five to ten years