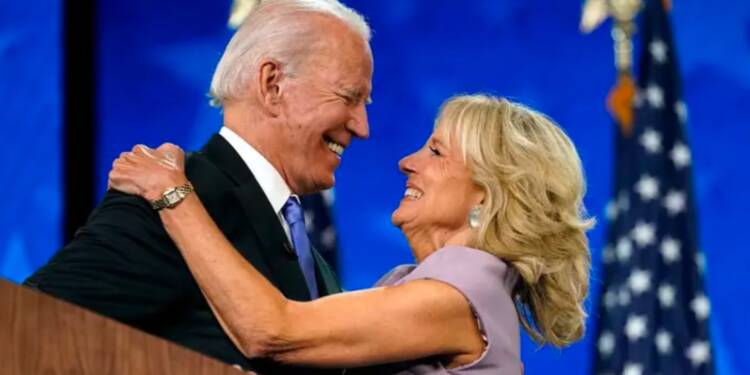 The United States today stands more divided than ever, and it is faced with many problems at the same time — most prominent being the Coronavirus pandemic. If we take the words of the mainstream media Prophets at face value then, Joe Biden has found the perfect solution for solving all the problems that the USA is facing right now.  Jill and Joe Biden’s public display of affection is bringing people together and making all the problems the country is facing, disappear in thin air.

Love is in the air, and by showing the Presidential love story to the whole world and publically flaunting the affection between Jill and Joe Biden, the American media has jumped on the bandwagon. The mainstream media is providing absurd reasonings about why these displays are more significant than anything else to ‘heal America’. What about addressing job losses? Or people dying of the pandemic? Or even businesses going bankrupt? No policy decision can be compared to the impact the romance between the Bidens will have, or at least this is what the media wants everyone to believe.

The Politico tried to provide substance to these absurd claims. It mentioned that Jill and Joe Biden are trying something novel. They are on a mission to rebuild institutional norms and help heal a hurting nation. The publication claims that these Public Displays of Affection (PDAs) are the very medicine that the USA needs to solve all of its problems. These claims are objectively absurd. Such claims would only make sense if the attempt is to provide American people with memes and comic relief so they can laugh away their problems.

The Bidens have been at it from the time of the campaign days. In a bizarre turn of events, the then-Democratic presidential candidate, and now President Joe Biden bit the finger of his wife Jill Biden as she introduced him during a campaign event on November 30, 2019, in Council Bluffs, Iowa.

Other than this, the liberal media wants everyone to believe that instead of focusing on the problems and issues if the whole of America just watches and believes the PDAs by First Lady Jill Biden and President Joe Biden, all of its problems will be solved.

The public display of affection between the Bidens has been, in a sense, overshadowed by the affection American media is displaying for the Democrat President Joe Biden.

The tough questions that were posed to Donald Trump have, since the coming of Joe Biden, been transformed into the type of question an employee asks their boss before they want to get a promotion.

The American media and especially the left-liberal cabal has become a PR agency of the Democratic Party, trying to carry the newly elected President in a palanquin, isolated from any uncomfortable questions.

This was best visible when all these media houses went into celebration as soon as Joe Biden was sworn in as the President of the United States of America. David Chalian said that the lights that were shooting out from the Lincoln Memorial, along the Reflecting Pool looked, almost like extensions of Joe Biden’s arms embracing America. Such personification is only done when either a person is looking for a pay raise or some other form of profit is sure to arrive.

All these things tell us a simple fact, that is, all the irrelevant actions will be shown to have some sort of a magical impact and solving all the issues, however, on the ground things will only get worse. Joe Biden is healing the country by his public display of affection and it is only the privileged ones, who can agree with the mainstream media from the comforts of their homes. And all those suffering and facing problems are either termed “White Supremacists” or “Trump supporters” who, according to them, need to be kept behind the bars.