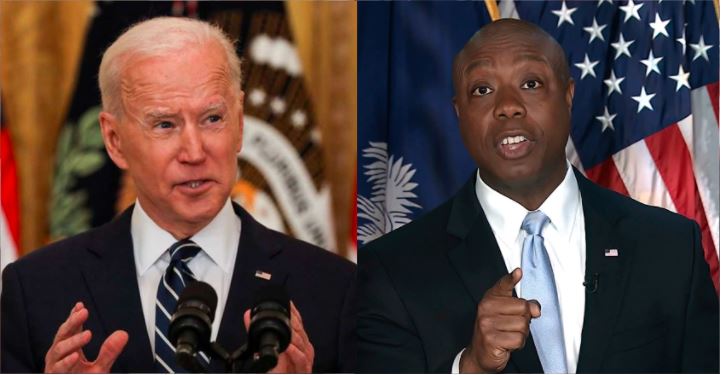 Tim Scott, a Republican senator, claimed on Wednesday night that it is Donald Trump, not Democrats, who deserve credit for bringing the coronavirus under control. Scott was responding to Joe Biden’s first speech to Congress. The only Black Republican in the US Senate started by denying racial injustice, then went on to describe his own experiences with racism. But instead of being heard by the left-leaning Democrats, he was racially attacked on “Twitter” after which a racial slur about him trended on the platform for more than 12 hrs.

Scott slammed Biden’s speech, saying the President gave “false platitudes” about national unity and blasting him for accusing the US of “systemic racism” in remarks made after former police officer Derek Chauvin was convicted in the death of George Floyd.

“Hear me clearly: America is not a racist country. It’s backwards to fight discrimination with different discrimination. And it’s wrong to try to use our painful past to dishonestly shut down debates in the present. Original sin is never the end of the story. Not in our souls and not for our nation. The real story is always redemption,” Scott said.

After the speech, he was attacked by being called “Uncle Tim” for saying “America is not a racist nation” in his rebuttal to President Biden’s first speech to a joint session of Congress, and a racial slur about him trended on Twitter for 12 hours.

After Scott stated in his speech that he has received negative remarks about his race because of his political beliefs, the word started to trend on Twitter late Wednesday night. The social media behemoth didn’t stop the attacks from showing in its Trends until 10 am, Thursday.

In a Thursday appearance on “Fox & Friends,” Scott blasted his critics’ use of the slur, saying, “You cannot step out of your lane according to the liberal elite left.”

“Intolerance so often comes from the left with words like ‘Uncle Tim’ and the N-word being used against me by the left, and last night what was trending on social media was ‘Uncle Tim,’ ” said Scott.

“It is stunning in 2021 that those who speak about ending discrimination want to end it by more discrimination,” He added, “The left has doubled down that they are going to, not attack my policies, but they’re literally attacking the color of my skin.”

Scott “gets called Uncle Tom by leftists,” Toure, an MSNBC contributor, said on Twitter, “He is, however, an Uncle Tim.” MSNBC is a mainstream media house, which drives the left-leaning agenda in the United States.

Tariq Nasheed, a divisive social justice activist, uses the name to suggest Scott was acting “in bad faith” and to “shield white supremacists.” He said, “A major strategy of racists, is to incentivize one of it’s [sic] Black victims to act as the crash test dummy for white supremacy. When Uncle Tim Scott says America is not a racist country, he is fully aware he is speaking in bad faith. The purpose is to protect white supremacists.”

Conservatives, however, defended Scott, with Republican spokesman Paris Dennard calling on Vice President Joe Biden and the Democrats to condemn the use of the slur. He tweeted, “Sen. @votetimscott is an honorable man. He’s fought for Black Americans his entire life. HBCU funding, Criminal Justice & Police Reform, School Choice & Opportunity Zones. Bigotry should always be denounced. Biden & Democrats should denounce the disgusting use of ‘Uncle Tim’!,”

Bigotry should always be denounced. Biden & Democrats should denounce the disgusting use of "Uncle Tim”! pic.twitter.com/Lw01wgLYxX

Mollie Hemingway, a Fox News analyst and writer at The Federalist, chastised Twitter for “choosing to trend a racial assault from the left” on Scott. She said, “Twitter is still out here going out of its way to make racist attacks against GOP Sen. Tim Scott go viral. Apparently, they want him to suffer for the crime of upstaging Biden via a highly effective speech. Disgusting​,” she said Wednesday night on the social media site.”

Twitter is choosing to trend a racist attack from the left on Sen. Tim Scott, the black Republican senator from South Carolina. pic.twitter.com/kpyPOHnuXJ

Scott expressed disappointment that the authors of the trending words against him on social media want to live their lives as they please, but don’t want Conservatives to have the same freedoms, preferring instead to confine them to a corner.