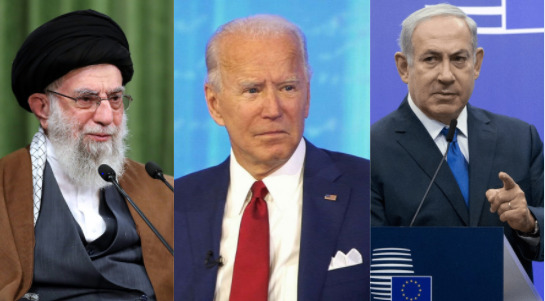 As a desperate Biden keeps pushing for an Iran nuclear deal, Israel has issued a final warning for Iran. Israel’s Intelligence Minister Eli Cohen has made it clear that the Jewish nation will not tolerate another weak deal that allows Tehran to keep pursuing a nuclear weapon. Cohen warned, “A bad deal will send the region spiralling into war.”

Eli Cohen made the sharp remarks on Thursday. He has apparently sent the Biden administration into a tizzy. US Secretary of State Antony Blinken even met visiting Mossad chief Yossi Cohen and Israel’s ambassador Gilad Erdan in Washington on Thursday itself. The subject matter of discussion was quite obvious- Iran.

The US-Israel-Iran situation is now becoming quite clear. Biden wants the nuclear deal at any cost and for all we know, he might finalise even a diluted form of the 2015 Joint Comprehensive Plan of Action (JCPOA). But Israel does not want that, as the Jewish nation cannot let Iran become too powerful in the Middle East. So, Israel is pushing back and giving some very potent war threats if Biden and Iran negotiate a weak nuclear deal.

In fact, Israel has now directly threatened Iran. Israel’s Intelligence Minister, thus, told Reuters, “Anyone seeking short-term benefits should be mindful of the longer-term.” He added, “Israel will not allow Iran to attain nuclear arms. Iran has no immunity anywhere. Our planes can reach everywhere in the Middle East – and certainly Iran.”

But while the warning was given to Iran, the real message was communicated to US President in the Oval Office. In fact, Israel’s Ambassador to the United States Gilad Erdan did make it clear that the Biden administration would consult with Israel about any new nuclear deal.

Yet, Erdan did deem the prospects of a new and better nuclear deal unlikely. He told Israel’s public radio station Kan, “We assess, to our regret, that the Iranians will refuse such a discussion.”

So, Israel has very smartly put the Iran nuclear deal in jeopardy. On one hand, Israel has made a very serious threat of waging war with Iran in case a bad nuclear deal is finalised. On the other hand, it has also compelled the Biden administration to consult the Jewish nation before taking any decision on a new nuclear deal.

The effect of Israel’s diplomatic aggression is to push the US on the backfoot. Biden can hardly afford military clashes between Israel and Iran, and that too over a nuclear deal finalised by his administration. This is why Blinken had to reason with the MOSSAD chief and Israel’s Ambassador to the US during a two-hour meeting.

The stakes are so high that the Thursday meeting was also attended by Deputy Wendy Sherman, President Joe Biden’s national security adviser Jake Sullivan and two other senior officials, Brett McGurk from the National Security Council and Derek Chollet from the State Department.

Read More: Iran is blackmailing the Biden administration by using John Kerry to drive a wedge between Israel and the US

Israel once again used the meeting to mount pressure on the Biden administration. Reuters claimed that a person familiar with the matter said that Israeli officials expressed “deep concern” about Iran’s nuclear activities. The Israeli officials are also said to have underscored their “freedom to operate” against Iran as they see fit.

There is no information on how Blinken and other American officials reacted. But we do know that the Biden administration would be looking to calm tempers. In fact, the White House would be looking at Israel anxiously and hoping against hope that Jerusalem would allow a possible nuclear deal between Tehran and Washington.

Yet, Israel has managed to put the Iran nuclear deal on the backburner. Israel wants a very wide nuclear deal that truly reins in Tehran, and the Jewish nation is even considering war as an option if its expectations are not met. Iran, on the other hand, would be unwilling to sign an unfavourable nuclear deal. This might well as mean a dead end for Biden’s hopes of reviving the JCPOA.