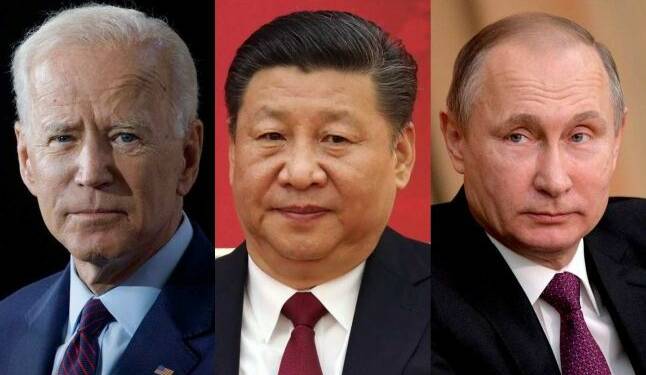 President Joe Biden’s actions are leaving the United States of America vulnerable and eroding its global leadership. One of the features of American leadership has been the dominance of the US Dollar for global trade. But Biden’s intense obsession with Russia is pushing Moscow closer to Beijing. In fact, Biden’s actions are now ensuring that China’s Yuan dethrones the big American Dollar.

Russia’s State-run international television network, RT reported that the Russian Foreign Ministry plans to “ditch US dollar & axe dependency on West.” This is a consequence of a spree of sanctions imposed by Biden on Moscow over unconfirmed allegations of cyberattacks and election interference.

Zakharova, Russian Foreign Ministry spokeswoman, said that facing harsh economic sanctions from Washington and its European allies, Moscow is trying to cut Western influence out of the Russian economy.

Launching a stinging verbal assault on the Biden administration, the Russian Foreign Ministry spokeswoman said, “Unfortunately, the reality of our time has been the increased use of politically motivated unilateral measures by some Western states, mainly the US. We see the sanctions against Russia more and more as a ‘gesture of desperation’ due to the inability of elites to accept the new realities, abandon their collective groupthink, and recognize Russia’s right to determine its own development path and build relations with its partners.”

Prior to Zakharova’s remarks, the Russian Foreign Ministry has time and again suggested undermining the role of the greenback in Russia’s economy. Last month, Foreign Minister Sergey Lavrov said, “The United States has declared its mission is to limit the technological development opportunities of both the Russian Federation and the People’s Republic of China.”

Lavrov also suggested that the US Dollar should be de-prioritised as the default currency in international markets and that the two nations should move away from using “Western-controlled international payment systems.”

The big problem for the US here is Lavrov’s reference to cooperation with the People’s Republic of China. For Beijing, developing Yuan into a global currency rivalling the US dollar is a long-term foreign policy goal. China could easily challenge the leadership of the greenback if it can convince its partners to transact in e-yuan for trade and development projects.

In fact, China is looking to use the Digital Currency Electronic Payment (DCEP) during the Beijing 2022 Winter Olympic Games. Also, China plans to use its Belt and Road Initiative (BRI) to break the American monetary sovereignty as part of its efforts to turn the Yuan into a global currency.

Apart from this, Lavrov’s lieutenant, Deputy Foreign Minister warned that the unpredictability of American foreign policy has  “called into question the reliability and convenience of using the American currency as the priority currency of deals.”

Zakharova too has told RT that “a gradual departure from the US-centric configuration of the global monetary system” has already begun. She too underscored the need for coordination with Russia’s trading partners, which can be taken as a hint towards Beijing.

The fact remains that American sanctions are painful as they weaponise the global dollar-based banking transaction system, and target every single company using the US dollars or operating Stateside subsidiaries.

Russia realises how the Biden administration is constantly using the dominance of a Dollar-based banking transaction system to ransack the Russian economy. As such Putin does not want to befriend China because of a number of differences and disagreements between Beijing and Moscow, but the US President compels him to move towards promoting Yuan and dethroning Dollar as the instrument of global trade.