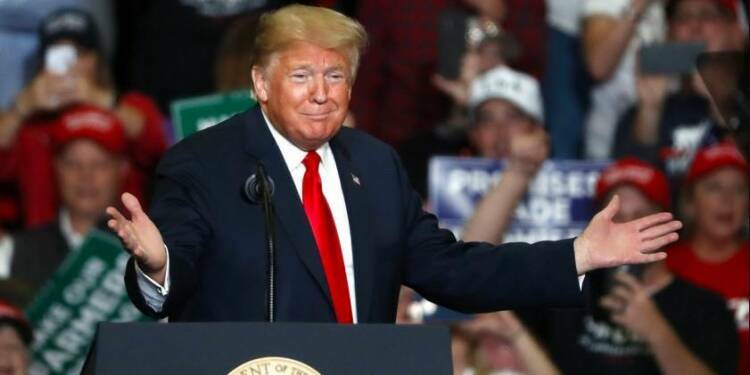 On Tuesday, former US President Donald Trump made a big move in the direction of liberalising the extremely hegemonic digital and media space that has come to exist in the United States of America, particularly under the patronage of Joe Biden and his crony Democrats. Trump launched a communications platform on Tuesday, which will serve as “a place to speak freely and safely,” and will eventually give him the ability to communicate directly with his followers, after months of being banned from social media platforms like Twitter and Facebook, Fox News reported. A platform named ‘From the Desk of Donald J. Trump’ has been launched so that Trump can post pictures, videos, comments, and articles.

According to reports, the new platform launched by the former President has been built by Campaign Nucleus, created by Trump’s former campaign manager Brad Parscale. The space allows people to share content on Twitter and Facebook. However, the newly launched platform remains a unidirectional communication platform as of now, with users not being given any features to reply to or engage directly in conversation with the former President.

In a catchy video, which best grabs the attention of the viewer and takes it towards the absolute control which Big Tech and liberals have come to exercise over Americans, the caption read, “In a time of silence and lies, a beacon of freedom arises. A place to speak freely and safely. Straight from the desk of Donald J Trump.” A footnote says the tool is funded jointly by the ex-president’s Save America and Make America Great Again political action committees. Users also have the option to shop via the platform, while they can also contribute towards the cause of Donald Trump – which is to return their precious freedom back to American citizens.

However, the platform is not the social media offing that has grabbed headlines for the past few months. To that end, work is still reportedly in progress. Jason Miller, a senior adviser to the former president, sought to provide a clarification via Twitter, “President Trump’s website is a great resource to find his latest statements and highlights from his first term in office, but this is not a new social media platform,” he informed. “We’ll have additional information coming on that front in the very near future,” the adviser added.

🚨President Trump’s website is a great resource to find his latest statements and highlights from his first term in office, but this is not a new social media platform. We’ll have additional information coming on that front in the very near future.🚨 https://t.co/m9ymmHofmI

The platform, called “From the Desk of Donald J. Trump” also allows users to sign-up and enter their phone numbers and email addresses in order to receive alerts for when Trump posts a new message. The platform is being seen as a precursor to Trump’s eventual planned bombardment of the digital space with his own offerings – bereft of censorship and allowing all people to say whatever is on their minds without fear of being banned or suspended from the platform.

Biden has allowed Chinese student spies to return to the US, but fear of Trump is still holding them back