It’s gonna be YUUGE. Trump is coming back on the internet with a brand new social media platform of his own 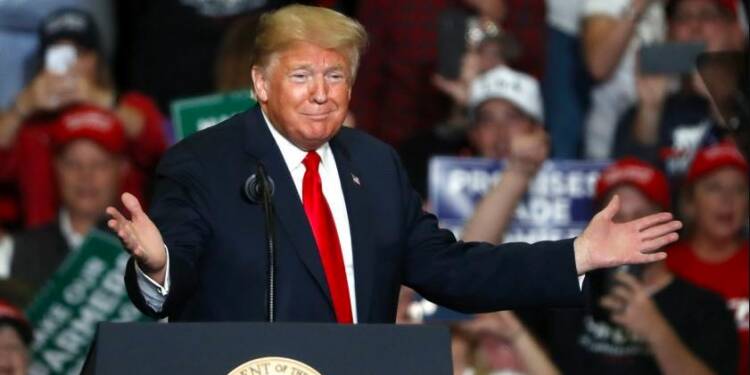 A couple of months after being unceremoniously de-platformed from voicing his opinion on left-leaning silicon valley based tech companies like Twitter, Facebook, Instagram and YouTube, former American President Donald Trump is set to make his comeback, albeit on his own terms and his own independent social media platform. Trump’s spokesman, Jason Miller confirmed in an interview with Fox News that the former President could be seen in his new avatar in the coming two-three months.

Miller said, “I do think that we’re going to see President Trump returning to social media, probably in about two or three months here, with his own platform.”

Miller went to say, “This is something that I think will be the hottest ticket in social media. It’s going to completely redefine the game. And everybody is going to be waiting and watching to see what President Trump does but it will be his own platform.”

“I do think that we’re going to see Pres. Trump returning to social media, in probably two or three months, with his own platform.” pic.twitter.com/csi3VUtzfs

Claiming Trump’s presence would attract “millions and ten of millions” of people to the new venture, Miller also revealed that several big companies had approached Trump and his team. He added, “There have been a lot of high-powered meetings he’s been having at Mar-a-Lago with some teams of folks who’ve been coming in.”

As reported by TFI in February, Trump had already started mulling over introducing a social media platform with his personal branding to reach the American public and the free world that had grown weary of the partisanship of the social media companies.

Read more: Trump is launching his own suite of social media portals, just what the free world needed

Earlier Trump had remarked that he had not returned to social media yet because he “wanted to be somewhat quiet,” adding that he was negotiating with several people about his social media plans.

Trump even took a dig at Twitter and said that it had become a boring place and millions were leaving the platform, saying, “I’ll tell you, it’s not the same. If you look at what’s going on with Twitter, I understand that it’s become very boring and millions of people are leaving.”

Read more: ‘Millions are leaving Twitter,’ in his first interview after Jan 20, Trump reveals that he has social media plans

As an outspoken President who never tried being politically correct, Trump was a victim of bashful trolling and hatred from the entire left-liberal cabal in addition to the mainstream media throughout his four-year tenure. However, the big tech companies, using his name and reach continued to mint the big bucks, until the time Trump lost the Presidentship.

To pander to the Democrats who had now gained access keys to the White House, the social media platforms like Twitter and Facebook finally bared their fangs and unloaded an entire load of the guilt of the January 6 insurrection attempt at the Capitol Hill on Donald Trump.

No sooner did the Jack Dorsey platform ban Trump, other social media platforms followed the suit like mindless sheeps. However, sensing that a rival platform is in the making, YouTube has already started making amends. Earlier this month, YouTube said that it would lift Trump’s ban on the site when the “risk of incitement to violence abates,” which is just a casual way of saying that YouTube does not want its money-making goose to shift to its own platform and potentially hamper its money-making routes.

It is important, more so than ever that Trump leads the way and builds a sustainable social media environment where the conservatives and other free class of people can share their opinions and views without being subjected to hate and vitriol that the usually hyperactive left regurgitates upon. Parler, the inherent right-wing platform was not allowed to run because the conservatives finally found a voice on it.

Now Trump has the mantle to usher the world into an era of online freedom where no voice is stifled and simultaneously instil fear in the hearts of the monopolistic social media companies who seem to have become mini-dictators on their own – banning and censoring everything, and anything that seemingly crosses their line of agenda.