“In a democracy, you just do not cut the mic,” France led by President Macron comes out in open support of Trump 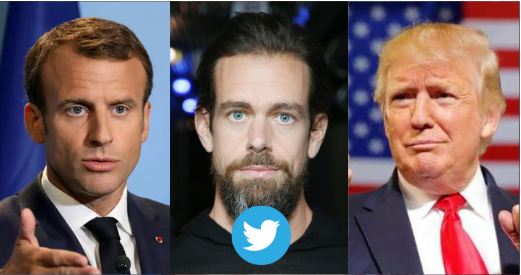 At a time when the Western world is being overwhelmed by the left-liberal cabal and the post-modernists which are in a way, Marxists in modern packaging, French President Emmanuel Macron is turning out to be one of the few remaining voices and values of classical liberalism. While everyone was celebrating the actions by the social media giants like Twitter to suddenly censor the US President Donald Trump in his last days of Presidency as a progressive and exemplary action, many found it to be the black day for the Right to Freedom of Speech.

Keeping true to his credentials of being a classical liberal and French to the core, Emmanuel Macron on Thursday, lambasted social media platforms for their decision to “suddenly cut the mic” as soon as they were sure that Donald Trump was leaving power, particularly as they had effectively “egged President Trump” on during his presidency. This will surely dishearten many people who preach Marxism in the guise of Liberalism as Macron has shown them the mirror and come in full support of Donald Trump.

France, under the able leadership of President Emmanuel Macron, has understood how dangerous the current Democrat leadership is, for the western civilisation at large. This is why he minces no words while addressing issues relating to the USA.

In a way, Mr Macron shows mirror to the dispensation in Washington regarding what are the true western values. To quote Emmanuel Macron verbatim, “I don’t want to live in a democracy where the key decisions… is decided by a private player, a private social network. I want it to be decided by a law voted by your representative, or by regulation, governance, democratically discussed and approved by democratic leaders.”

Can any of our top leaders say this in public? https://t.co/EKoZPdM4AR pic.twitter.com/vYqMy9eWzg

Macron was decisive enough to say it bluntly, that the social media companies banned Donald Trump at the exact moment they were sure that he was in no position to do anything to these companies.

Former American President Donald Trump was banned from the microblogging platform Twitter permanently. The banning of a state head from a social media platform is a precedent that had never been set before. Twitter is the same platform that claims to live and die by the virtue of Freedom of Speech and Expression. However, the social media platform’s actions like banning a powerful leader like Trump, suggest that tooting the horn of ‘FoE’ is merely a charade, invented to pander to the whimsies of left-liberals.

The support from the French President Macron comes at a time when the western leaders have shed their responsibility to maintain the basic tenants of classical liberalism and democracy. They have instead have opted to maim the population at large and control using the Marxist tools in the new packaging of post-modernism and left-liberal coalition.

The second wave of Japan’s economic offensive against China is here. And it is brutal