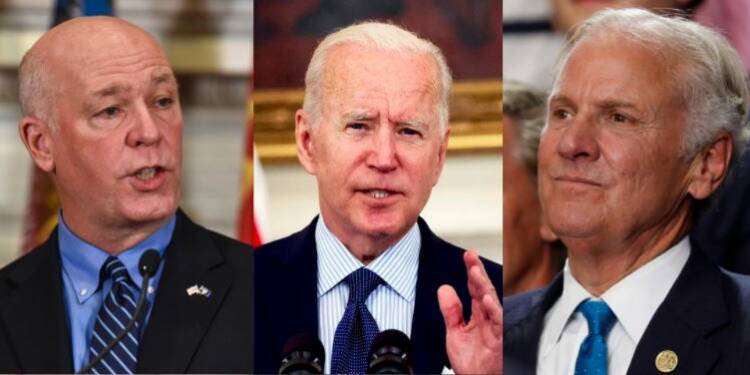 US President Joe Biden is killing American businesses with his $300 weekly unemployment benefits. With the enhanced unemployment compensation exceeding the regular wages in many cases, many Americans are refusing to work resulting in massive labour shortages. US businesses are struggling to find workers and even if they do get to employ someone, the wage costs would be unusually high. However, two Red states – Montana and South Carolina, are pushing back against Biden’s far-left unemployment benefit scheme. The Governors of the two states announced this week that they were ending participation in federal unemployment programs.

The federal programs pay funds to long-time unemployed and a $300 weekly supplement to benefits, apart from issuing aid to the self-employed, gig workers and others who do not qualify for governmental assistance.

Montana and South Carolina Governors have slammed the unemployment programs for inducing workers to stay at home and thereby creating a labour shortage crisis.

South Carolina Gov. Henry McMaster said, “What was intended to be a short-term financial assistance for the vulnerable and displaced during the height of the pandemic has turned into a dangerous federal entitlement, incentivizing and paying workers to stay at home rather than encouraging them to return to the workplace.”

Biden was forced to announce the enhanced unemployment benefits, because of all the pressure that he was facing from influential far-left Democrats like Ilhan Omar. Yet, the enhanced benefits have dented the US economy and the jobs growth rate in the country is far below expectations. The Labour Department disclosed that non-farm payrolls increased by a mere 266,000 jobs in April as compared to 770,000 in March.

The US is currently facing a peculiar situation in which businesses want to hire workers, but workers do not want to get employed as the government is paying them anyway. Why would anyone want to work, when the unemployment benefits exceed wages?

Well, the US Chamber of Commerce, the largest business lobbying group in the United States of America has blamed Biden’s $300-per-week federal jobless benefit for labour shortages. It said, “The disappointing jobs report makes it clear that paying people not to work is dampening what should be a stronger jobs market.”

The business lobbying group even suggested, “One step policymakers should take now is ending the $300 weekly supplemental unemployment benefit.” However, the Biden administration is unlikely to accept the suggestion given the kind of soft Communism which has infested it. Far-left Democrats are already showing no signs of letting the Biden administration end the catastrophic policy.

Yet, the Republican states understand the pain and anguish which American businesses are facing. South Carolina and Montana have already got rid of Biden’s $300 weekly unemployment benefits and now other Red states are also likely to follow suit.

While Joe Biden is leaving no stone unturned, when it comes to ransacking the US economy, Republicans are clearly pushing back against his detestable measures. At least in Red states, American businesses can thus be hopeful of avoiding labour shortages.