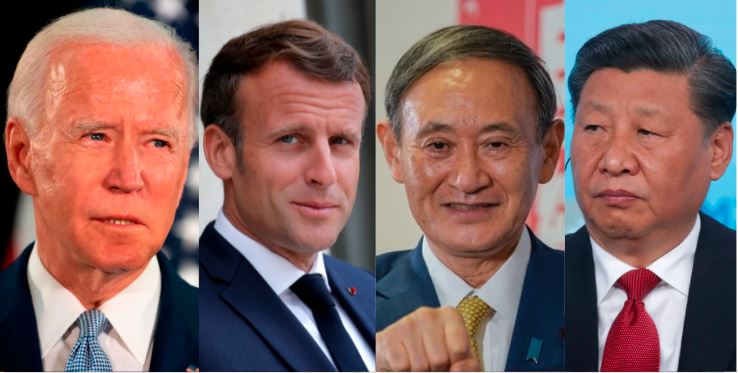 French President Emmanuel Macron has a stern message for the United States and China- France has got Japan’s back, with or without Joe Biden’s US. The Epoch Times reported that from May 11 to 17, the French Army troops will be training in Kyushu, Japan at Kirishima Training Ground along with Japan’s Ground Self Defense Force (GSDF) and US marines.

The seven-day exercise is going to be historic in the sense that this is the first time that foreign troops, other than US military forces, would train in Japanese territory. Apart from all the symbolism and messaging that the exercise carries, it is strategically planned in the southwesternmost of Japan’s main islands, near the East China Sea– the present venue of growing military tensions between Beijing and Tokyo.

The exercise will involve the GSDF’s Amphibious Rapid Deployment Brigade (ARDB), which is described as Japan’s “Marines”. It will comprise tabletop exercises at Camp Ainoura near Sasebo, which is the home base of the ARDB. In fact, this isn’t the first interaction between GSDF and the French Military.

In 2017, French ambitious ship, Mistral, carrying French Marines and British Royal Marines had linked up with the US Marines and the GSDF for a joint four-way on Guam and nearby Tinian.

However, the present exercise is way more important, both at a diplomatic level and in terms of geopolitical significance. As we told you that this is the first time in the post-War era that Japan has opened up to an exercise with a non-US foreign military force on its territory.

The fact that Japan is shedding its pacifism in order to let French forces in is a reminder of how the Macron administration has been able to win the trust and confidence of French allies in the Indo-Pacific. By training in one of Japan’s Southwestern Island, Paris is also warning Beijing that French forces are ready to complement Japan in the East China Sea.

Of late, Chinese vessels have been frequently intruding into the Japanese waters near the Senkaku Islands in the East China Sea. Tokyo perceives these intrusions as a serious security threat and in this sense, an apparent show of French support does act as a deterrent against possible Chinese military misadventures.

More importantly, Macron is sending some really strong signals to his US counterpart. As French Army trains in Japanese territory,  Biden stands warned against abandoning Japan. For Paris, Chinese expansionism and belligerence in the Indo-Pacific is an ideological and strategic threat, whereas Japan is a natural ally for the European power.

As such, Macron does observe how Biden is getting increasingly biased towards Beijing, and thus giving a cold shoulder to Indo-Pacific allies such as Japan. But the French President has a clear strategy- if Biden abandons Japan and creates a security vacuum in the East China Sea region, then French military forces will fill in that vacuum immediately.

Macron’s push to improve France’s defence partnership with Japan is however a signal for Biden. The US President would have to maintain sufficient troops presence for Japan’s support, or else Paris will have no qualms in taking care of Japan’s security needs. France is ready to replace the US when it comes to acting as Japan’s best friend in terms of defence cooperation and that would be a major jolt for Biden.

At the same time, Japan is also giving a stern warning to both Chinese President Xi Jinping and US President Joe Biden. Japan has a new friend in the form of France. Biden and Xi must not live in the illusion that if the US forces are suddenly withdrawn, then Tokyo won’t be able to match up to the “China threat”.

In fact, if Biden doesn’t act proactively against China, it might as well lose much of the influence it presently enjoys in the region. France has thus scored a big geopolitical victory with its latest manoeuvre.

How much does it take to buy out a Prime Minister? Unveiling the CCP-Jacinda Ardern deal

‘I won’t speak more, or I will be in trouble,’ Biden candidly admits that he is not the one running the US