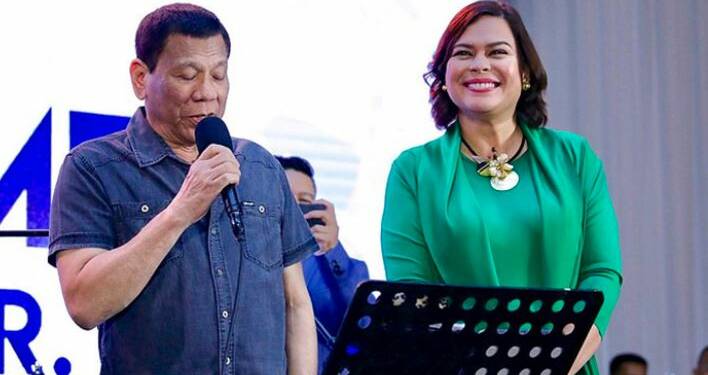 The thing about term restrictions is that they reduce a President’s ability to impose his own policies beyond his own stint in power. Your predecessor may or may not follow your policies. But there is always a chance to bypass the term limits if the President can get his own child elected to the top post. This is exactly what the Philippines President Rodrigo Duterte is trying to do, and it is not good news.

Rodrigo Duterte is ineligible to run for President again in the 2022 polls because he is term-limited by the 1987 Philippine Constitution. Duterte’s ouster could nullify his embrace of Beijing which has endangered historic ties between Manila and Washington, given the growing anger against Chinese incursions in the South China Sea. Yet, Rodrigo’s daughter Sara Duterte is being pitched as his successor, which is really the last thing that the Philippines needs.

Sara Duterte has really emerged as a frontrunner in the race for Philippines President. Opinion polls show that she is far ahead of other contenders for the top post in terms of popularity. Rodrigo says that Presidency is no job for a woman and Sara herself claimed that there is no chance that she would run for President.

Sara told Reuters, “I made a chart where I listed the whys and why nots before I decided that I am not going to run.” Yet, few are convinced by what the Dutertes have to say.

A major campaign is underway in the Philippines to project Sara Duterte as a successor of the sitting President. The slogan “Run, Sara, Run” is being used to promote her with banners, stickers, t-shirts, calendars and posters bearing the younger Duterte.

Mar Masanguid, who had led Rodrigo Duterte 2016 poll campaign said, “It is the clamour of the people that will make her run.”

And then, Sara does have prior experience in immediately succeeding her father. Sara Duterte is presently the Mayor of Davao. Interestingly, her father had held the post of Davao Mayor for over twenty years. Before 2010, Sara used to be the Vice-President of the southern city. However, in 2010, the Dutertes swapped titles in order to circumvent term limits.

In fact, it is believed that Sara is playing the same game ahead of the 2022 elections, which her father Rodrigo Duterte had played in the run-up to the 2016 polls. At that time, Rodrigo Duterte was in denial of Presidential ambitions, just like Sara is presently refusing to run for President despite her growing popularity.

By refusing to contest in 2016, Rodrigo Duterte had allowed the public enthusiasm for his Presidential bid to mount. Ultimately, the senior Duterte had announced his candidature at the last minute, which caused a sudden spike in public support for the sitting President. Sara Duterte is now using a similar set of tactics ahead of the 2022 Presidential polls.

But at the end of the day, the Philippines cannot afford the Dutertes to hold on to power for another six years. Honestly speaking, Rodrigo Duterte’s Presidency has been a disaster. He has simply succumbed before Chinese belligerence at the disputed features of the South China Sea.

In fact, before the 2016 polls, Rodrigo had promised to ride a jet ski and plant a Philippine flag on artificial Chinese islands in the South China Sea. But now, he has said, “That was the time of campaign and that joke we call it bravado. My bravado was just a pure campaign joke.” He even called those who had believed him “stupid”.

For the Philippines, the threat of Chinese aggression is very real. Beijing already controls the Scarborough Shoal- a disputed feature in the South China Sea, claimed by both Beijing and Manila. Presently, Chinese maritime militias are also eyeing Whitsun Reef, a geographical feature in Filipino waters, which is also being claimed by China.

Despite such Chinese belligerence, Rodrigo Duterte keeps embracing China. One can only imagine how much more influence Beijing will enjoy in the Philippines if Sara Duterte comes at the helm of affairs in Manila. The Philippines is already struggling to ward off Chinese aggression and the last thing it needs is Duterte’s daughter as the President.

Le Pen should be an ally to Macron’s anti-Radical Islam push, not a critic of it