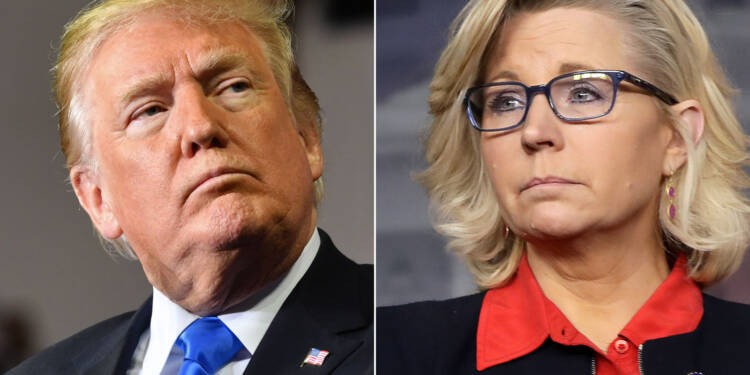 The eviction of Liz Cheney has opened the floodgates in the Republican Party, as the larger party apparatus decides to rid the party of the people who are going to be a roadblock for Donald Trump’s 2024 candidature. Now sure about the inevitable, a group of at least 100 Republican former officials is threatening to form a separate party if the GOP does not separate itself from former President Donald Trump, according to multiple media reports.

The “Call for American Renewal,” first reported by Reuters and NBC News, is expected to be detailed in a letter released Thursday. It is being organised by Miles Taylor, a former Trump administration official who penned the then-anonymous New York Times’ op-ed “I Am Part of the Resistance Inside the Trump Administration,” in 2018. These Republicans have realised that it was not long when they too will be booted out of the party, given their anti Trump inclinations.

Donald Trump was undoubtedly one of the greatest Republican Presidents in a long time. So, what led to his shocking defeat? The manipulative Democrats, biased mainstream media and the big tech- some of Trump’s biggest enemies had a big role to play. But Trump also has many underrated yet lethal enemies- haters within the Republican Party. These enemies showed their true colours after Trump’s shocking defeat and the US Capitol Hill violence.

In fact, some of the Trump haters within the Republican Party went as far as voting to impeach him. But now the former US President is looking determined to weed out such mischievous elements from the Grand Old Party (GOP). And this is making the moles in the Republican Party jittery. The Washington Post reported that Trump is plotting to take down GOP lawmakers who voted to impeach him earlier this year. The Washington Post also claimed that according to a Trump advisor, the former US President is focusing on “revenge endorsements.” What we observe here is that Trump has actually targeted Rep. Liz Cheney of Wyoming, the No. 3 House Republican.

Read more: Trump’s determination to weed out anti-Trump voices in the GOP have made the moles in the party jittery

The current letter calls for “resistance of the ‘rationals’ against the ‘radicals’” and reportedly includes involvement from former New Jersey Gov. Christine Todd Whitman, past administrator of the Environmental Protection Agency; former Pennsylvania Gov. Tom Ridge, the first secretary of homeland security; former Transportation Secretary Mary Peters; and former GOP Reps. Charlie Dent of Pennsylvania, Barbara Comstock of Virginia, Reid Ribble of Wisconsin and Mickey Edwards of Oklahoma. Other names tied to the letter have not been released.

In fact, as per Washington Post, the Trump advisor disclosed that the former President is not only targeting those who voted to impeach him but that he is also looking to go after those elected officials who he thinks were insufficiently supportive of him after the Presidential polls. This clarifies the way in which these 100 plus establishment Republicans are reacting and why they are contemplating forming a new party.