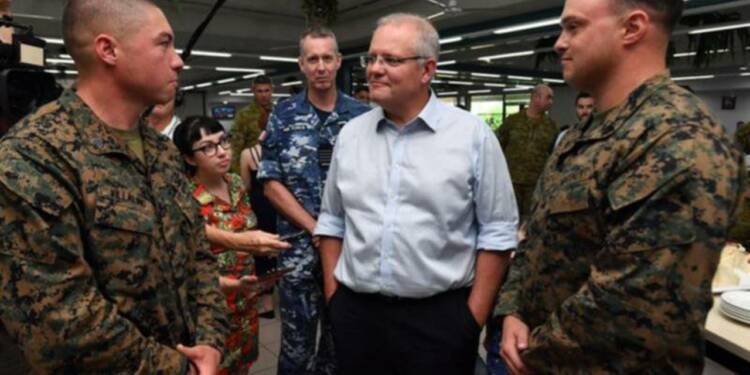 Australia started an ideological battle with China last year. Canberra started by demanding an international probe into the origins of the Wuhan virus, condemning the violation of human rights in Xinjiang and Hong Kong, and also standing up for the island nation of Taiwan. But the Sino-Australia battle is no longer merely ideological. It is fast turning into a strategic, economic and geopolitical face-off which could easily lead to the militarization of the bilateral tensions.

China is belligerent. It does not care for world peace and attacks anyone who defies its hawkish policies. Australia is no exception. China is already accused of fighting grey zone warfare with Australia. Hardline Chinese Communist thinkers even talk about bombing Australia. So, the latest turn of events carry an important message for Canberra- go nuclear before Chinese belligerence spirals out of control. In fact, there are growing calls within Australia to develop nuclear deterrence against Chinese belligerence.

Earlier this month, Hu Xijin, editor in chief of CCP mouthpiece Global Times wrote, “I suggest China make a plan to impose retaliatory punishment against Australia once it militarily interferes in the cross-Straits situation.”
Reflecting his violent mentality, the Global Times editor in chief added, “The plan should include long-range strikes on the military facilities and relevant key facilities on Australian soil if it really sends its troops to China’s offshore areas and combats against the PLA.”

Hu concluded, “If they (Australia) are bold enough to coordinate with the US to militarily interfere in the Taiwan question and send troops to the Taiwan Straits to wage war with the PLA, they must know what disasters they would cause to their country. China has a strong production capability, including producing additional long-range missiles with conventional warheads that target military objectives in Australia when the situation becomes highly tense.”

Citing Hu’s threat, Anders Corr, an academician from Yale and Harvard suggested that the United States and other allies should “immediately support Australia in obtaining an independent submarine-based nuclear deterrent so that Australia can join the countries such as the United States, France, Britain, and India as powerful global defenders of freedom and democracy.”

Corr also spoke about the limited time period within which Australia will have to go nuclear. Writing in The Epoch Times, he said, “Australia has a limited window of opportunity in which to go nuclear, after which China’s rising power and regional hegemony will make an independent nuclear Australia impossible.”

According to Corr, the “limited window of opportunity” could be as short as 5 or 10 years.

Academic opinion in Australia is slowly mobilising around the need to develop nuclear weapons in order to tackle the Chinese threat. In his book, “How to Defend Australia”, Hugh White, a professor of strategic studies at the Australian National University, argued that developing nuclear weapons has become inevitable.

Read More: Australia laid a trap for China and China fell into it. And now it stands exposed

White added, “The strategic costs of forgoing nuclear weapons in the new Asia could be much greater than they have been until now.”

Canberra has questioned Chinese belligerence, which is why Australia now finds itself at the forefront of Chinese aggression. Bangkok Post quoted Malcolm Davis, a military planner as saying, “Far from being in a strategic backwater, Australia is very much now a state in the front line.”

China is a bully one cannot reason with. If the paper Dragon acquires asymmetric firepower, it will simply seek to undermine its ideological rivals. And in the case of Australia, China is already threatening to use its lethal military power against Canberra. Ultimately, Australia will have to understand that it cannot fight Beijing without ramping up military strength. If Canberra has to handle China, there is only one option- go nuclear.