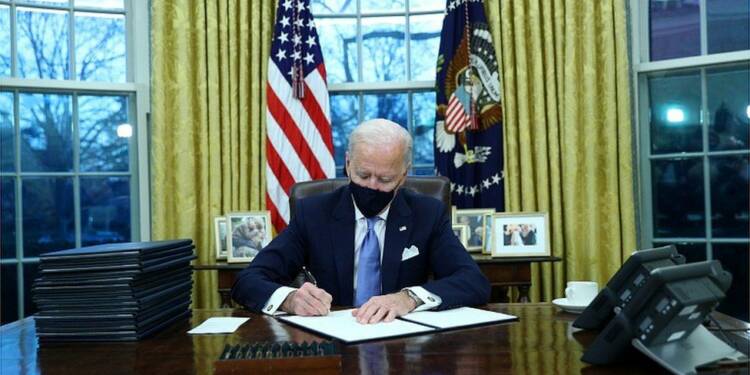 Joe Biden has kept himself on the task of removing the Trump era executive orders. President Joe Biden reversed a number of executive orders signed by former President Donald Trump on Friday, including ones aimed at social media platforms’ moderation policies, shielding Americans from “overcriminalization” by legislation, and establishing the “National Garden of American Heroes,” among other things.

There are certain “things you can’t do by executive order unless you’re a dictator”. This is what Biden said in October last year at an ABC News town hall. The Democrat was then speaking about how quickly he would raise taxes on corporations and wealthy Americans if elected to power.

Fast forward to January 2021, Biden is now the President of the United States. He took over on January 20 and within the first 10 days of his Presidency; Biden has signed 42 executive actions. Executive actions are a convenient way to impose your will unilaterally. But as Biden said there are certain things you cannot do with executive orders unless you are a dictator.

Joe Biden’s obsession with the Trump era executive orders is to be seen only from the lens of negative bias that he and his team holds for the Republican presidency. Six of his predecessor’s presidential decisions were rescinded by Biden’s executive order, which also directs the heads of executive departments and agencies to “promptly consider taking measures” to reverse any policies enacted by Trump’s orders.

Since January after taking office, Joe Biden and his administration have kept on the task of erasing his predecessor’s legacy through executive actions just because he cannot get bipartisan consensus on such contentious issues and it can certainly not be defined as very democratic. Also, Biden has shown a tendency to delete his opposition by pushing Trump’s impeachment even after coming to the helm of affairs.

The Biden administration is not only relying on executive actions indiscriminately but also dismissing the criticism against frequent reliance on the unilateral system. White House communications director Kate Bedingfield frowned at the criticism against Biden’s executive orders. He said, “Of course we are also pursuing our agenda through legislation. It’s why we are working so hard to get the American Rescue Plan passed, for starters.”

According to The National Pulse, “That’s ten times as many as Donald Trump and over eight times as many as Barack Obama. It is a whopping 22 times greater than Bill Clinton, and 42 more than Presidents Reagan and Bush.”

Now he is at it again. Among Trump’s orders that are to be abolished under Biden’s action is the planned “National Garden of American Heroes,” a project that Trump sought to implement in the waning days of his presidency via a Jan. 18 directive that called on the monument to “be built to reflect the awesome splendour of our country’s timeless exceptionalism.”

“It will be a place where citizens, young and old, can renew their vision of greatness and take up the challenge that I gave every American in my first address to Congress, to ‘believe in yourselves, believe in your future, and believe, once more, in America,’” Trump wrote in his executive order, which also made mention of an “attack” on the “belief in the greatness and goodness of America” by a “dangerous anti-American extremism that seeks to dismantle our country’s history, institutions, and very identity.”

In addition to these, the “National Garden of American Heroes,” conceived as a “vast outdoor park that will display the statues of the greatest Americans to ever live,” was to feature sculptures of hundreds of American historical figures, including presidents, celebrities, and pop culture icons, and was to be created by Trump’s order.

Trump’s June 2020 order, which directed the federal government to “prosecute to the fullest degree allowed by Federal law” acts of vandalism and damage of monuments on federal land, was also repealed. The order was issued in response to the defacing of statues during nationwide demonstrations triggered by George Floyd’s death in police custody.