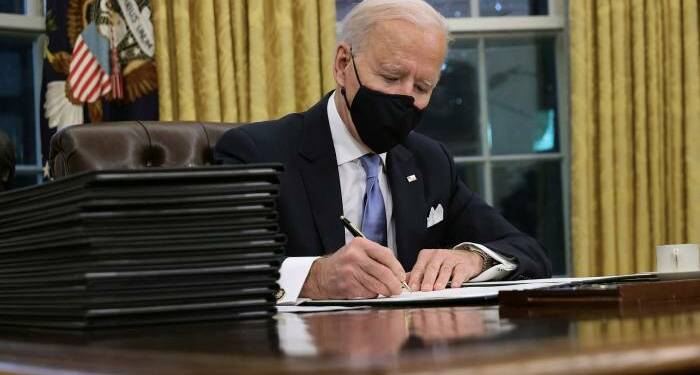 There are certain “things you can’t do by executive order unless you’re a dictator”. This is what Biden said in October last year at an ABC News town hall. The Democrat was then speaking about how quickly he would raise taxes on corporations and wealthy Americans, if elected to power.

Fast forward to January 2021, Biden is now the President of the United States. He took over on January 20 and within the first 10 days of his Presidency; Biden has signed 42 executive actions. Executive actions are a convenient way to impose your will unilaterally. But as Biden said there are certain things you cannot do with executive orders unless you are a dictator.

Till now Biden has not done that one thing- raising federal taxes through executive action, which would have admittedly made the US President a dictator. But he is definitely doing some controversial things with his broad power to sign executive actions.

Take for instance, Biden’s desire to erase Trump’s legacy with executive actions. The US President has described his executive actions as an effort to “undo the damage Trump has done” by fiat as against “initiating any new law.”

Now, erasing your predecessor’s legacy through executive actions just because you cannot get bipartisan consensus on such contentious issues can certainly not be defined as very democratic. Also, Biden has shown a tendency to delete his opposition by pushing Trump’s impeachment even after coming at the helm of affairs.

The Biden administration is not only relying on executive actions indiscriminately, but also dismissing the criticism against frequent reliance on the unilateral system. White House communications director Kate Bedingfield frowned at the criticism against Biden’s executive orders. He said, “Of course we are also pursuing our agenda through legislation. It’s why we are working so hard to get the American Rescue Plan passed, for starters.”

According to The National Pulse, “That’s ten times as many as Donald Trump and over eight times as many as Barack Obama. It is a whopping 22 times greater than Bill Clinton, and 42 more than Presidents Reagan and Bush.”

The Biden administration is actually looking to find excuses for ruling the United States of America through executive actions. White House press secretary Jen Psaki said, “There are steps, including overturning some of the harmful, detrimental and, yes, immoral actions of the prior administration that he felt he could not wait to overturn, and that’s exactly what he did.”

Biden is using executive actions to impose his will more frequently than any of the recent US Presidents. Democrats and Biden supporters used to label Trump as an authoritarian leader, but it seems that it is the Biden administration which is functioning in a rather authoritarian manner. Biden’s first 10 days in office have thus poked holes in the promises that the Democrats were making throughout Biden’s poll campaign.