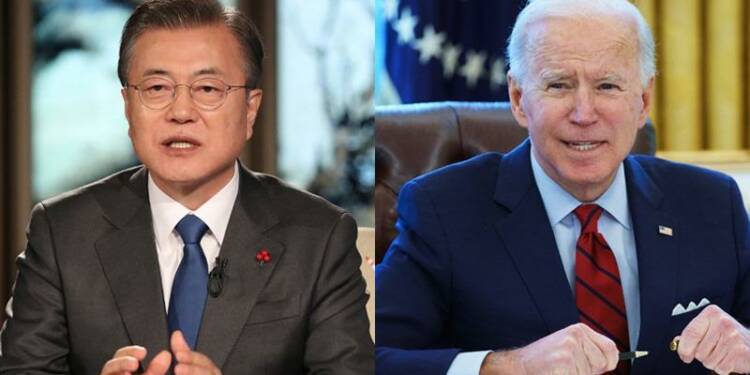 The old man in the Oval Office clearly fails to understand how diplomacy works. Take Biden’s Quad politics for instance. Joe Biden, a China sympathiser, wants to dilute the informal strategic forum comprising India, Australia, Japan and the US. So, he is looking to rope in another China sympathiser to the group- South Korea’s President Moon Jae-in. Yet, the move is bound to backfire and make Seoul anti-China, instead of diluting the Quad.

South Korea is heading towards elections, and the incumbent Moon Jae-in has very low approval ratings. He is facing public criticism for going soft on China and also failing spectacularly in the Korean Peninsula peace dialogue. Moon cannot run for President again, because the office of South Korean President is term-limited. But no one minds a small diplomatic victory at the fag end of a Presidential stint.

Moon is set to meet Biden on Friday, and if the Quad issue comes up, Moon would probably not hesitate in joining the informal body. Anyhow, Biden stands to lose because a conservative, anti-China regime is expected to come to power in Seoul. So, don’t be surprised if South Korea’s inclusion in the Quad makes Seoul anti-China instead of making Quad softer in its intensity against Chinese hegemony.

There is a clear indication of how Biden wants to morph Quad’s anti-Beijing image. China views Quad’s vision of Free and Open Indo-Pacific (FOIP) policy as a strategy to contain its hegemony in the region. But Biden thinks that if Seoul is brought in, then the attention of Quad can be diverted towards other issues like North Korea’s denuclearisation.

In fact, the White House included the North Korean nuclear issue in its mission statement for the Quad. The White House stated, “We reaffirm our commitment to the complete denuclearization of North Korea in accordance with United Nations Security Council resolutions, and also confirm the necessity of immediate resolution of the issue of Japanese abductees.”

The White House statement also mentioned Myanmar, in line with the Biden administration’s policy of reducing the informal group’s total focus on China. It stated, “As long-standing supporters of Myanmar and its people, we emphasize the urgent need to restore democracy and the priority of strengthening democratic resilience.”

Japan, India and Australia may or may not be directly concerned about these issues. But truth be told, these three countries never joined Quad for the sake of North Korea’s denuclearisation or showing solidarity with Myanmar’s democracy. Their only purpose behind finding the Quad was to push back against Chinese belligerence in the region, and to jointly pursue their vision of a Free and Open Indo-Pacific.

What Biden doesn’t understand is that the three US allies in Quad are simply too stubborn on retaining the focus on Beijing that they will make South Korea anti-China instead of diversifying the informal strategic group.

It will be quite easy for New Delhi, Tokyo and Canberra to tempt a conservative regime in South Korea towards embracing a collective strategy to check China’s rising hegemony. Ultimately, an extended Quad would put more pressure on Joe Biden to take a firm stand on China.

Biden’s South Korea gamble is therefore a strategic blunder, in terms of his own political objectives. The US President wants to dilute the Quad, but he is unwittingly strengthening it in the process.