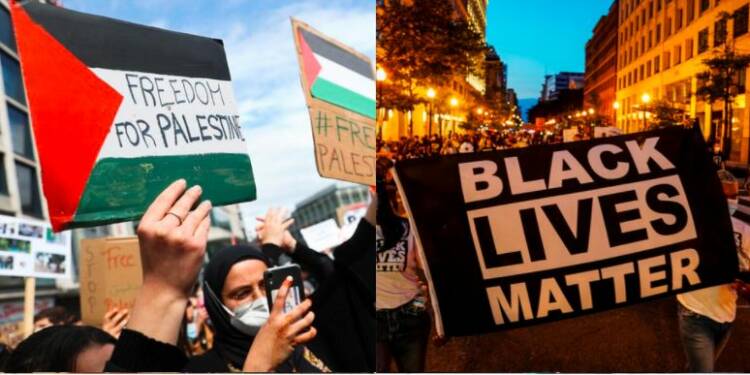 The face of Black Lives Matter activists has become clear with time, and as everyone knows the reality, it should not come as a surprise that they have not wasted any time to come in support of Hamas, which has been long recognised as a terrorist organisation. Hamas being a terrorist organisation is as clear a fact as the earth being round, but just like flat earth believers, BLM activists are trying to be oblivious of it.

A week after Hamas terrorists in Gaza began firing indiscriminate rockets into Israel, shelling civilian targets and dropping several missiles short and blowing up buildings within Israel’s territory, the leading Black Lives Matter group announced “solidarity with Palestinians” on Monday. The announcement prompted a “thank you” tweet from the controversial Boycott, Divestment and Sanctions movement, or BDS, which has for years called for an economic embargo of Israel.

“Black Lives Matter stands in solidarity with Palestinians. We are a movement committed to ending settler colonialism in all forms and will continue to advocate for Palestinian liberation. ( always have. And always will be ). #freepalestine,” BLM tweeted from its official Twitter handle.

Black Lives Matter stands in solidarity with Palestinians. We are a movement committed to ending settler colonialism in all forms and will continue to advocate for Palestinian liberation. ( always have. And always will be ). #freepalestine

While the progressive Islamic nations are criticising Hamas, BLM is taking a stand for them. The United Arab Emirates, which was the first of all Arab nations to sign an Abraham Accord with Israel, has reportedly issued a stern warning to Hamas. As per Israeli media, the UAE is said to have asked Hamas to stop its hostile actions against Israel, or else its planned investments in the Gaza Strip may not move forward.

Globes, a Hebrew-language financial newspaper, quoted a senior Emirati official as saying, “We are still ready and willing to promote civil projects in cooperation with the Palestinian Authority and under UN management [in Gaza], but our necessary condition is calm.”

Following a violent altercation between Israeli police and Palestinian demonstrators at the Al-Aqsa mosque, a holy place for both Jews and Muslims, the military conflict erupted dramatically on May 10 when Hamas began firing rocket after rocket at Jerusalem. The rockets have managed to fly through hundreds of Israeli counterattacks and the Iron Dome missile defence system.

Left-wing organisations and democratic politicians, on the other hand, have blamed Israel for the abuse, calling it an “apartheid regime” that commits “war crimes” and other massacres against Palestinian civilians, whom Hamas often uses as human shields, attracting airstrikes on high-rise buildings that share space with civilians.