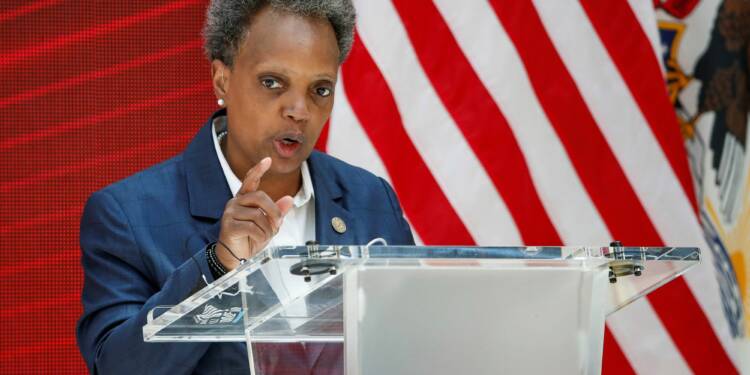 Imagine this. A White mayor of any city in the United States of America banning Black journalists from interviewing them on a one-on-one basis. What would the outrage look like? Leave alone outrage, riots would spill out onto the streets of America, and BLM activists would be out in the open shouting their lungs out crying foul over how “systemic racism” continues to be perpetrated in the United States by Whites. But guess what? The mayor of Chicago is doing exactly that. The only difference is that Lori Lightfoot is a Black woman who is also gay.

That does not discount the fact that the Chicago city mayor is a racist. In fact, she is plagued with the very same disease which she claims to fight. In recent news, Lori Lightfoot has barred White journalists of Chicago from interviewing her on the occasion of her completing two years in office. The best part is that Lightfoot is masquerading this blatant racism as a means of ‘restoring racial equity. The decision of the Chicago mayor to give interviews only to Blacks and persons of colour has outraged many media persons not just in the city, but across the United States.

“It’s a shame that in 2021, the City Hall press corps is overwhelmingly White in a city where more than half of the city identifies as Black, Latino, AAPI or Native American,” Lightfoot said in a tweet. She added, “This is exactly why I’m being intentional about prioritizing media requests from POC reporters on the occasion of the two-year anniversary of my inauguration as mayor of this great city.”

Separately, in a letter to all media houses of Chicago, the racist mayor said, “I have been struck since my first day on the campaign trail back in 2018 by the overwhelming whiteness and maleness of Chicago media outlets, editorial boards, the political press corps, and yes, the City Hall press corps specifically.”

Read more: Chicago Mayor Lori Lightfoot is turning Chicago into a haven for criminals. And detractors are being labelled racists

In her endeavour to bar White journalists from exercising their right to question her, Lori Lightfoot has received major pushback from unexpected quarters. One Latino reporter with The Chicago Tribune cancelled a scheduled interview with the mayor over her decision to ban White journalists from asking her questions. Gregory Pratt, who covers the mayor and City Hall took to Twitter to say, “I am a Latino reporter at the Chicago Tribune whose interview request was granted for today. However, I asked the mayor’s office to lift its condition on others and when they said no, we respectfully cancelled. Politicians don’t get to choose who covers them.”

I am a Latino reporter @chicagotribune whose interview request was granted for today. However, I asked the mayor’s office to lift its condition on others and when they said no, we respectfully canceled. Politicians don’t get to choose who covers them. https://t.co/YMW8M8ZgJm

This is not the first time that the racist mayor of Chicago has hit the headlines. In fact, in February, Lori Lightfoot went on to display her insanity when she accused two Aldermen of making “racist” and “xenophobic” remarks against illegal immigrants. This was after the two Aldermen – Anthony Napolitano (41st) and Raymond Lopez (15th) opposed modifications to the Welcoming City ordinance. The ordinance had proposed to make Chicago a safe haven for criminals and felons, especially if they happened to be illegal aliens. For their opposition to the ordinance, Lightfoot blasted out as she said, “Being an immigrant is not a crime, I just have to say, shame on you.”

A wave of reverse racism is gripping the United States of America under Democrats. Whites are being specifically and institutionally targeted for their skin colour and genders in Blue states. What’s worse, the blatant reverse racism is being portrayed as a means of achieving ‘racial equity’ in America.

China has successfully vaccine-trapped, UAE, Bahrain and most of the developing countries