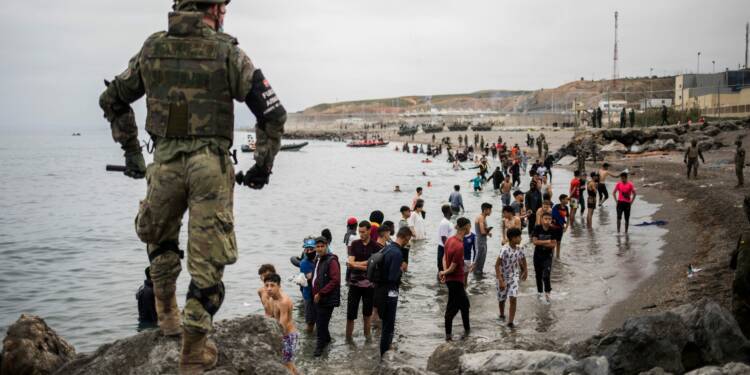 The situation in the whole Middle East and North Africa (MENA) is getting tense again, and on the other end of the African continent the situation between Morocco and Spain is also getting worse. Beginning on Monday, about 8,000 migrants illegally reached Ceuta, a Spanish swath of land bordering Morocco on the North African coast, surprising Spanish authorities. Spain deployed the army and additional police forces to reinforce border controls before launching a mass expulsion of all who had arrived, including families and minors. The influx occurred at a time when Spain and Morocco were at odds over the Spanish government’s decision to allow the leader of a northern African independence movement to seek treatment in Spain for Covid-19.

Thousands of illegal migrants attempted to reach Spanish territory seemingly unhindered by Moroccan authorities, deepening a diplomatic divide between the two countries. Thousands of refugees have reached Ceuta, one of two Spanish enclaves on Morocco’s northern coast, forcing Spain to scramble to protect its borders. This looks very much similar to how Turkey has from time to time let the immigrants move into Europe and use it as a leverage to make their demands met.

According to Spanish officials, about half of the 8,000 refugees, who were mainly Moroccan, have been returned to Morocco. Nonetheless, the arrivals have sparked a diplomatic row between Spain and Morocco, especially after reports and footage appeared to show Moroccan authorities allowing migrants to reach Ceuta without attempting to stop them. CNBC has reached out to the Moroccan Foreign Ministry for comment, but has yet to hear back.

Brahim Gali, the leader of the Polisario Front, a party advocating for the independence of Western Sahara, a disputed region over which Morocco claims sovereignty, was recently admitted to a Spanish hospital for Covid-19. In a Facebook post late Tuesday, Moroccan Minister for Human Rights El Mostapha Ramid slammed Spain’s decision, calling it “unacceptable.” Other Moroccan officials had recently expressed their displeasure with the situation. Gali was admitted to Spain on humanitarian grounds, according to the Spanish government.

Morocco is now using its only leverage and that is to imitate Turkey and launch a migrant spurt towards Spain to get its demands met and come out on top at the discussion table. While the latest incident — one of thousands of attempts by migrants to reach European territory in recent years — has served only to highlight the EU’s weak borders and a lack of a unified EU action on migration, the EU has expressed its support for Spain.

“This can be achieved with agreement on the New Pact on Migration. Stronger partnerships based on mutual trust and joint commitments with key partners like Morocco are crucial,” she said.

This can be achieved with agreement on the New Pact on Migration.

Stronger partnerships based on mutual trust & joint commitments with key partners like Morocco are crucial.

Ceuta is on the north African coast, east of the Gibraltar Strait that divides Spain and Morocco. The city is surrounded on all sides by Moroccan territory and the Mediterranean Sea. It is the only land boundary between the European Union and Africa, along with Melilla, another Spanish enclave on the Moroccan Mediterranean coast. Both cities have served as a magnet for refugees attempting to reach Europe from northern Africa as a result of their geographic location. And not only that, it has also become the western Achilles heel when it comes to arm twisting Europe with the scare of letting migrants lose into Europe.

Mohammed Ben Aisa, head of the Northern Observatory for Human Rights, a nonprofit group working with migrants in northern Morocco, told the Associated Press that the Moroccan authorities had recently reduced the usually heavy military presence along the coasts and it is done to make Spain feel the heat, meanwhile the Moroccan was not reachable any comments.

The Moroccan government has copied the tested method of forcing the hands of their European adversaries and neighbours by showing the threat of uncontrolled migrant flow into Europe, if their interests are not sufficiently cared for. This time too, Morocco allowed the largest ever influx of migrants via its boundaries into Spain, and it overtook the earlier record by more than twice.