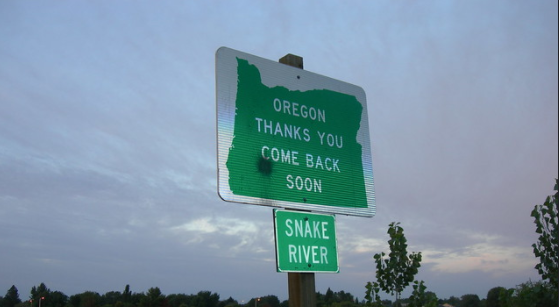 The political divisions in the USA are at an all-time high, and the statement by Joe Biden that his term will focus on healing has turned out to be empty rhetoric. And as the moderate voices in the Democratic Party lose support, many people in blue states, fearing liberal takeover, are trying to change states of their respective counties. An effort to move nearly two dozen of Oregon’s most rural counties into the more conservative neighbouring state of Idaho has gained momentum – with five counties voting this week in favour of having local officials consider the issue, according to reports.

The bid has been spearheaded by the Citizens of Greater Idaho, which wants to relocate between 18 and 22 Oregon counties to Idaho, according to FOX 12 in Portland. With the number of crimes increasing in the cities, and the way in which the Democrats are supporting the utter lawlessness, the people are getting oblivious of any future in the blue states. And instead of migrating away from the lands which they have inhabited for a very long time, they are working on ways to make their respective counties move out of blue states and into red states.

On Tuesday, Sherman, Lake, Grant, Baker and Malheur counties joined two others who voted in November in favour of discussing the issue. “The Oregon/Idaho border was established 161 years ago and is now outdated,” Citizens for Greater Idaho says on its website. “It makes no sense in its current location because it doesn’t match the location of the cultural divide in Oregon.

Parts of southeastern Washington and northeastern California, which appear to be more conservative than the rest of those left-leaning states, are also welcome to join them, according to the party. As reported by Fox News, Idaho Gov. Brad Little, a Republican, said he supports the measure but acknowledged there’s a long way to go toward making it a reality, The Oregonian reported.

“I understand why many people want to be Idahoans,” Little said in a statement, according to FOX 12. “They’re looking at Idaho fondly because of our strong economy, regulatory atmosphere and our values. Still, the decision to change Idaho and Oregon’s borders would need to go through both states’ legislatures and the U.S. Congress for approval. There’s a lot that needs to happen before the border is within the realm of possibility.”

“This election proves that rural Oregon wants out of Oregon,” Mike McCarter, president of Move Oregon’s Border for a Greater Idaho, said in a statement, The Oregonian reported. “If Oregon really believes in liberal values such as self-determination, the Legislature won’t hold our counties captive against our will. If we’re allowed to vote for which government officials we want, we should be allowed to vote for which government we want as well.”

Earlier, the divided House passed legislation to make Washington, D.C., the 51st state and to grant its more than 700,000 residents full representation in Congress. These kinds of developments have only made people more and more resolute to make their respective counties join red states. Now people in blue state Oregon are so miffed at the liberal takeover that 18-22 counties want to join Red state Idaho