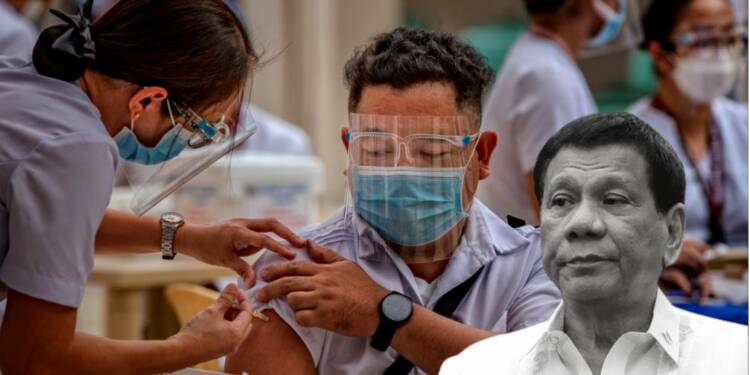 The Duterte government in the Philippines was for a very long time a big fan of the communist regime in China and under the fanboy syndrome he overlooked all the data, analysis and reviews available regarding the Chinese vaccines for Covid-19. The popularity of the Chinese vaccine has since plummeted so much that it is leading to vaccine hesitancy, and that too of a very unique type, given the hesitancy is just for the Chinese vaccines and not vaccines in general.

The people are so wary and scared that to solve the problem the Duterte govt is forced to hide vaccine information. As per news reports, the Philippines will stop announcing the maker of the Covid vaccines being administered at inoculation centres, after people crowded venues offering Pfizer jabs. The new policy is meant to “overcome vaccine brand preference” as the Philippines, already challenged by prevailing vaccine hesitancy, races to inoculate over half its population this year and revive a reeling economy.

And talking about the unpopularity, it is rooted in some truth. The Seychelles had fully vaccinated 60 per cent of its population against the Chinese virus. But the island country made a big mistake- it used a Chinese vaccine called Sinopharm. Having vaccinated 60 per cent of its population, the Seychelles- a tourism-dependent country, opened up itself to the whole world. Now, the Vanilla island country is facing a new surge of Covid-19 cases and therefore, the government is forced to bring back social restrictions.

Read more: Seychelles opened up itself to the world after vaccinating its people with Chinese vaccines. Disaster immediately struck

Let’s talk numbers. The Seychelles- an archipelago of nearly 100,000 people recorded around 500 cases at the start of this month. These were the first signs of an impending disaster. Today, the Seychelles has about 1,000 active cases. Interestingly, a third of the active cases were those who had two vaccine doses. Others were unvaccinated or had only received a single dose of vaccine.

Thus, when the people of the Philippines are trying to opt for options other than the Sinovac vaccine, it is for their own good. Out of the Philippines’ total supply of 8.2 million doses, only 193,000 Pfizer doses are available. Sinovac, a Chinese company, is responsible for the majority of the vaccines, which total 5.5 million. AstraZeneca supplied over 2 million doses, while Russia supplied 30,000 doses of Sputnik V vaccine.

The Pfizer doses, including those from AstraZenaca, are donated by the COVAX factory, which is supported by the United Nations. Priority is provided to front-line staff and the elderly. According to vaccine czar Carlito Galvez, the Philippines is expected to sign a contract for 40 million doses of the Pfizer vaccine, the country’s biggest deal to date.

The vaccination programme has been hampered by Filipinos’ apprehension about which vaccines to take, as well as general apprehension about Covid shots. Just 19 percent of Filipinos were able to be vaccinated, according to a survey conducted by Octa Research in January and February. According to Octa, confidence in vaccines from the United States is the highest at 41%, while trust in vaccines from China is the lowest at 13%.

However, the hesitancy cannot be totally put on the shoulders of the people, given the vaccine available from the very early days is the Sinovac. And at a time when other countries are either replacing them or overcompensating with other types of vaccines, the Duterte government kept forcing people to take the Chinese vaccine. And in this connected world of the internet, people get the information which they need. The information about Chinese vaccines not being effective could also have played a large role. In the backdrop of all these observations we can say that the decision by the Duterte government to hide the vaccine information from the people so that they are not choosing one over another can only be attributed to the unpopularity of Chinese vaccine in the country.

Israel-Gaza war: Iran had the opportunity to get sanctions lifted but Netanyahu had other plans