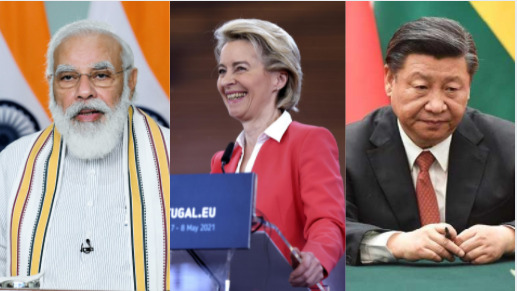 The European Union has dumped China. After fondling and caressing Beijing for the past few years, the European Union has chosen to side with India. What’s worse, the heartbreak for China and its despot Xi Jinping has come as a big surprise. Ties between the EU and China were going on a loving track, and on Thursday, the EU parliament suddenly halted the ratification of a new investment pact with China until Beijing lifts sanctions on EU politicians. The resolution to freeze ratification passed with 599 votes in favour, 30 votes against and 58 abstentions.

Earlier, in March, China had imposed sanctions on European officials and institutions after the European Union – along with the United Kingdom, Canada, and the United States – sanctioned Chinese officials over human rights abuses against Uyghur Muslims in the Xinjiang region. The great grand dumping of China by the EU has come in the backdrop of Europe and India, only earlier this month, resuming negotiations for a balanced and comprehensive trade agreement after a gap of eight years.

Launched in June 2007, the FTA talks between India and the EU had hit a roadblock in May 2013 when the two sides failed to bridge substantial gaps on crucial issues, including tariff, data security status for the IT sector and market access. Ever since the EU had begun tilting towards China. EU-China bonhomie continued until China sanctioned European officials and institutions in a tit-for-tat action. Now, the EU has once again decided to side with India.

However, the most recent development which has affirmed our belief of the EU comprehensively choosing India over China came in the form of the EU parliament deciding to extend support to India-South Africa’s joint proposal for Covid vaccine patent waiver that will help in large-scale production of the life-saving vaccines. On May 8, Indian Prime Minister Narendra Modi had given a clarion call to the EU and asked it to support India’s endeavour of seeing a global patent waiver for Covid-19 vaccines.

China, meanwhile, has ended up with an egg on its face. Despite employing all methods it knows of, both kind and intimidatory in nature against the EU, the intergovernmental bloc has decided to choose India over the paper dragon. The failure of the EU-China investment deal from being ratified by the European parliament is a huge setback for Xi Jinping’s wolf-warrior diplomacy.

The timing of China being ditched by the EU could not be more painful for Xi Jinping. The very fact that the EU and India have once against begun FTA negotiations means that Europe has had just about enough of China, and has realised the perils of associating or doing business with it. On the other hand, it knows for a fact that a free trade agreement with India would benefit it immensely. Official sources in the EU also told the Indian Express that the free trade agreement package will include an investment protection pact as well as a framework on geographical indication.

It seems everything is going south for China. India, on the other hand, is emerging as the natural choice for countries to ally with in a post-pandemic world order.