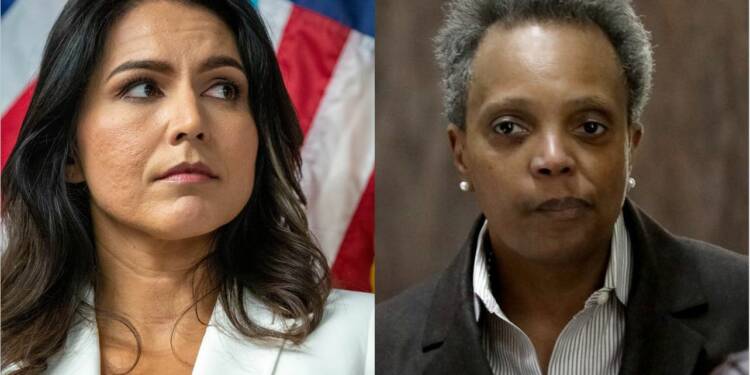 There are some things and some ethical questions which should be beyond partisan party politics and should be condemned in a bi-partisan manner. And by the looks of it, it is only Tulsi Gabbard who is taking this ethical stand among the whole slew of people. Former United States Representative Tulsi Gabbard on May 21 accused Chicago Mayor Lori Lightfoot of “anti-white racism” and called for her resignation. Taking to Twitter on Friday, Gabbard joined the backlash against Lightfoot after she sent a letter to local Chicago media on Wednesday saying that she would have interviewed only with journalists of colour.

Lightfoot recently blasted Chicago’s media landscape as being overwhelmingly White in a city with large Black and Hispanic populations as well as other ethnicities. While no one of her party came out to flag the obvious racism, the sorrier state was to see no Republican push back against her. In a tweet, Gabbard, a one-time Democratic presidential candidate from Hawaii, also called on President Joe Biden and other leaders to join her. This is the kind of aggression the Republicans need to showcase to take down the black supremacists like Lori Lightfoot

“Mayor Lightfoot’s blatant anti-white racism is abhorrent,” she wrote. “I call upon President Biden, Kamala Harris, and other leaders of our county—of all races—to join me in calling for Mayor Lightfoot’s resignation. Our leaders must condemn all racism, including anti-white.”

Lightfoot, a Democrat, and the city’s first Black and openly gay mayor has faced backlash since saying she will only give individual interviews to journalists of colour. In a two-page letter on Wednesday, she also chastised the city’s media outlets for their “overwhelming whiteness and maleness.”

“In looking at the absence of diversity across the City Hall press corps and other newsrooms, sadly it does not appear that many of the media institutions in Chicago have caught on and truly have not embraced this moment,” she wrote. “I have been struck since my first day on the campaign trail back in 2018 by the overwhelming whiteness and maleness of Chicago media outlets, editorial boards, the political press corps, and yes, the City Hall press corps specifically.”

Lightfoot also called on newsrooms across the city to hire more people of colour, LGBTQ+ and emphasised that they should specifically bring more women of colour. However, this decision of hers drove critics against Lightfoot to compare her to a “Nazi” as did Fox News host Tucker Carlson. He said of Lightfoot, “she knows who to hate, just by looking at them.”

These kinds of statements warranted a strict and tough reaction from the Republican to call out the hypocrisy, but the response came from an astute politician, Tulsi Gabbard. The Republican party should learn a thing or two about how they should respond to black supremacists like Lori Lightfoot.