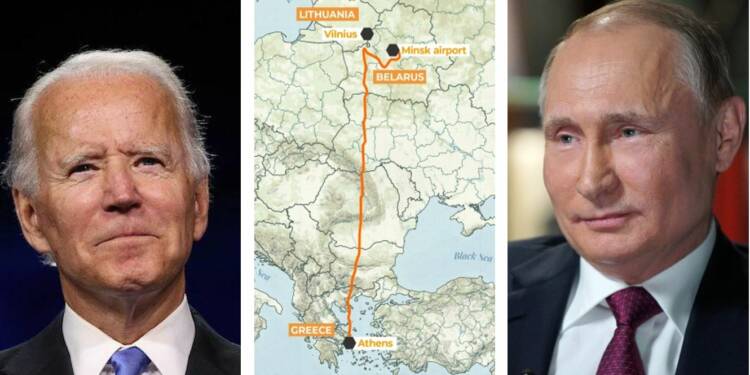 It seems that the situation in Eastern Europe is heating up again and it will reignite the Biden-Putin War and Putin might start spilling Biden’s secrets soon. As growing tensions between the countries were exacerbated Monday by Belarus’ aggressive attempt to divert a Ryanair flight in order to offload a dissident journalist, US President Joe Biden and Russian President Vladimir Putin are set for a possible confrontation during a scheduled summit next month.

Putin and Biden are scheduled to hold their first summit in Geneva, Switzerland next month, U.S. officials announced just hours before the Belarus incident. However, Putin has realized the situation very well and understanding the diplomatic strong hand he has right now, the Belarusian government has acted on the support of Russia.

Earlier, The Ryanair flight from Athens to Vilnius carrying dissident journalist Roman Pratasevich was diverted while in Belarusian airspace on Sunday over a supposed bomb threat. Accompanied by a Belarusian fighter jet on the orders of Belarusian President Alexander Lukashenko, the plane landed in the capital Minsk where Pratasevich, a 26-year-old who had been living in Lithuania, was arrested along with his Russian girlfriend.

Biden said Sunday’s diversion of the Ryanair plane in order to reportedly offload anti-Putin blogger Raman Pratasevich, 26, was an “affront to peace” just as Russian Foreign Minister Sergei Lavrov issued a statement calling the move an “absolutely reasonable approach.” Belarus insisted on Monday that it had acted legally and accused the West of politicising the situation. “There is no doubt that our competent authorities’ actions… fully met established international rules,” foreign ministry spokesman Anatoly Glaz said in a statement, accusing the West of “politicising” the situation.

Although the European power might expect some tough stance on the issue via Biden-Putin has got some dirt on Biden which has already forced him to concede to earlier demands. Or else how would you justify the following questions: Why is he letting the pipeline project through? Why is the incumbent US President throwing Kyiv under the bus by allowing a project that will undermine Ukraine’s strategic importance, by creating a new route that bypasses Ukraine for energy supplies to Europe? And why is he letting Berlin get involved in a project which will throw Germany off-course in respect of the Paris Agreement targets?

Well, Putin does have a lot of dirt on Biden which might have forced the US President to literally offer the entire European Continent to Moscow on a platter. Pulp fiction writers in the liberal US media and loudmouthed Democrats may keep piling literature about how Trump is Russia’s man, but when it comes to kneeling before Putin, Biden has a long history.  It was Biden’s former boss, Barack Obama who allowed Putin to operate Russian mercenaries and private military contractors to operate in Syria with impunity. Again, it was Obama who asked Putin’s aide Dmitry Medvedev to “transmit” his promise “to Vladimir” regarding “flexibility” on missile defence.

And then, the junior Biden has always been on the target of Republicans for his stint at a Ukrainian gas company. Given Russia’s skin in the game, it will not be a surprise if Putin exercises some control on Biden over this issue.

In the current instance, Russian lawmaker Leonid Kalashnikov declared that Belarus had the right to choose “methods that it considers feasible and necessary” needed to combat national security threats. However, it has prompted international condemnation as the U.S., the European Union, NATO and the United Nations spoke out against Lukashenko’s actions.

Going ahead it looks like, Biden, if forced to take on Russia and Putin, a lot of secrets that Putin holds will see the light of the day.