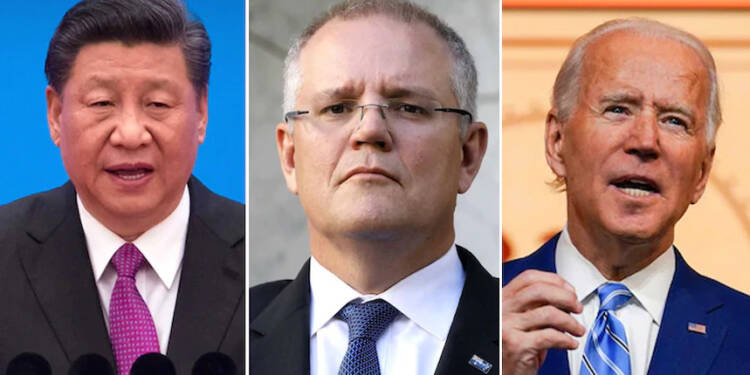 China has awoken a beat in Australia and after losing miserably in its attempts to bleed Canberra economically, now back to back big diplomatic victories of Scott Morrison have forced Biden to send weapons to Australia. Earlier last month the US government had approved the sale of weapons to Australia. “The State Department has made a determination approving a possible Foreign Military Sale to the Government of Australia of Heavy Armored Combat Systems and related equipment for an estimated cost of $1.685 billion,” the Defense Security Cooperation Agency said.

The Australian government had recently taken into cognisance the presence of the Chinese projects in the country. A Chinese plan to administer an Australian port near where tens of thousands of US and Australian troops train has become the latest stumbling block in Canberra-deteriorating Beijing’s diplomatic and trade relationship. Defence officials in Australia are examining whether a 99-year lease granted to Shandong Landbridge Group to run Darwin Port in 2015 for 506 million Australian dollars (about $392 million) poses a national security hazard.

In the aftermath of this development, Australia has secured the purchase of multiple weapon systems. The proposed sale, which has been sent to Congress for further approval, includes 160 M1A1 Tank structures that will be used to produce 75 M1A2 SEPv3 Abrams Main Battle Tanks, in addition to 29 M1150 Assault Breacher Vehicles, 18 M1074 Joint Assault Bridges, six M88A2 Hercules Combat Recovery Vehicles, and 122 AGT1500 gas turbine engines.

If this was too much in itself, Mike Goldman, the acting US ambassador to Australia, told News Corp’s The Australian that the US wants to deploy military weapons in Australia’s north to project power in the face of Beijing’s mounting strategic threats. Given the proximity of US sites, such as Guam, to Chinese missiles, Goldman said it “simply makes sense” to advance deploy US war assets in Australia, and that it provided strategic advantages. As part of a more “innovative defence collaboration” between Australia and the US, he would like to see Australia produce precision-guided missiles onshore.

The allies of the USA around the Indo-Pacific are making sure that Joe Biden’s disastrous foreign policy does not impact their interests negatively. Thus, now after Japan, Australia has forced the Biden administration to follow Trump’s China policy. US Secretary of State Antony Blinken on Thursday reassured full support to Australia in the face of economic coercion by China, as Washington and Canberra mark the 70th anniversary of their alliance.

While most of the time, the USA under Joe Biden has maintained a nonchalant attitude when it comes to Beijing’s intimidations to Canberra, Blinken said Washington has repeatedly criticised what it says are Beijing’s attempts to bully neighbours with competing interests, and U.S. President Joe Biden has sought to bolster ties with allies in the Indo-Pacific to counter China’s growing power.

The creation of a sovereign guided weapons capability, which was initially studied in the Department of Defence’s Force Structure Plan, is a top goal for Australian Prime Minister Scott Morrison. He’s also approved a plan to invest $1 billion (US$780 million) to help build a Sovereign Guided Weapons Enterprise. On March 31, the Department of Defense stated that it would choose a key industry partner to manage the government’s manufacturing capability for sovereign guided weapons.

All of this has transpired since the Scott Morission government has made sure that not only China understands that Australia is not a country that can be utilized for ulterior motives, but also told Joe Biden that leaving Canberra alone will be more problematic for the USA than it will be for Canberra.