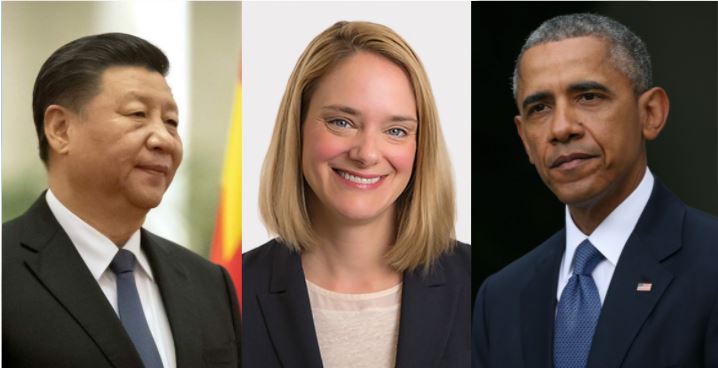 An Obama-Biden administration official campaigned for a Chinese tech firm to collaborate with the regime’s military and carry out state-sponsored surveillance operations against Uyghurs. Susan Lagana, who formerly served as the Communications Director for Barack Obama’s 2008 campaign in North Carolina, signed Hikvision as a lobbying client in 2019. Lagana was listed as a signatory on the documents establishing the first agreement, which was recently extended through December 31st, 2021.

According to Foreign Agent Registration Act (FARA) filings, Lagana’s lobbying business will “advise” the manufacturer and supplier of video surveillance equipment on the following subjects in exchange for a monthly fee of $25,000:

Lagana joined the company less than a year after leaving the Obama administration, where she worked as the Navy’s Director of Communications, an attorney at the Office of Personnel Management, and the Department of Transportation’s Director of Public Affairs.

Hikvision has been classified by the US Department of Defence as a proxy of the regime’s military, in addition to its close ties to the Chinese Communist Party due to its status as a state-owned enterprise. Many people are concerned that the data collected by the company’s monitoring equipment would fall into the hands of the Chinese Communist Party.

Furthermore, according to Reuters, Hikvision has been “linked to Uyghur abuses.” The firm is described as the “world’s largest purveyor of video surveillance systems and a vendor to Xinjiang police agencies.”

However, Joe Biden, another Obama era official who is also now the President of the United States, had been fairly complacent and understanding on Chinese actions in Xinjiang against the Uighurs. While speaking in Wisconsin  on February 18th, merely a month into his Presidency, Biden said, “Chinese leaders, if you know anything about Chinese history, it has always been – the time when China has been victimized by the outer world is when they haven’t been unified at home.”

“The central principle of Xi Jinping is that there must be a united, tightening control in China, and he uses his rationale for the things he does based on that. I point out to him, no American president can be sustained as a president if he doesn’t reflect the values of the United States, and so the idea that I’m not going to speak out against what he’s doing in Hong Kong, what he’s doing with the Uyghurs in western mountains of China, and Taiwan, trying to end the One China Policy by making it forceful, I say – and by that he says – he gets it,” Biden continued.

Moreover, if that was not enough, he added another justification. He said, “Culturally there are different norms in each country and their leaders are expected to follow.”

Obama era officials and their affinity to China keep cropping up time and again. The current President is no less a Chinese well-wisher than he was during the Obama administration. And going forward trying to resolutely stand in the face of Chinese aggression and belligerence and to save democracy could become an extremely difficult task if the affinity continues or worse; it grows.

China may dominate the UN today, but Japan is aggressively aiming to undercut it soon