As ASEAN realises that the USA under Biden is no longer reliable against China, Japan and India must do their bit 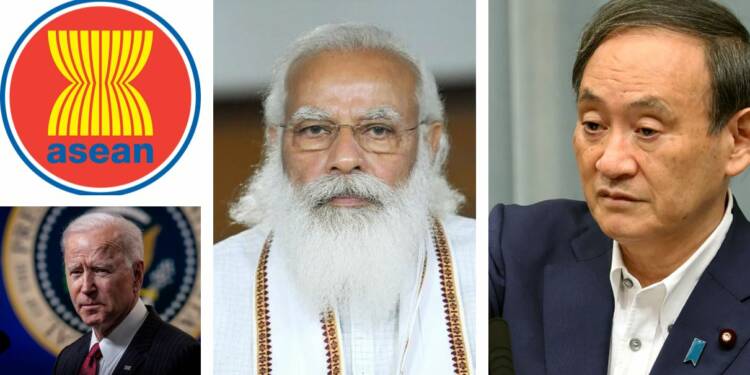 The ASEAN nations are facing an onslaught of Chinese belligerent activities and at such a time, the USA is only making half-hearted efforts to show its sincerity towards its Southeast Asian countries. In such a scenario, under a lacklustre foreign policy of Joe Biden, these ASEAN countries are hopeful for India and Japan to fill in the gap created by the US. While India and Japan are working in tandem to provide economic and developmental support to the regional countries, a more comprehensive policy together with the members of ASEAN could be the next go-to.

Months after President Joe Biden’s inauguration, the US is finally focusing its diplomatic efforts in Southeast Asia to oppose expanding Chinese dominance. Wendy Sherman, the United States’ Deputy Secretary of State, became the first senior State Department official in the Biden administration to tour ASEAN members this week. On Wednesday, Sherman visited with Thai Prime Minister Prayuth Chan-Ocha in Bangkok, where she announced $30 million in coronavirus aid. Even as the US ramps up its charm drive, many say Washington waited too long, giving Beijing an advantage in courting the region’s growing importance.

To put things into context, the situation in the South China Sea and the East China Sea is hotter than ever. China is continuously prying for terrestrial and maritime expansion in the region while ASEAN countries, India and Japan do all they can to ward off the Chinese threat. Now, in a big signal to the paper dragon – ASEAN member states and Japan are coming together to fight the menace of climate change. Japan is about to help Southeast Asian nations decarbonise themselves in the coming years – thus tremendously cutting their dependence on China. According to a report by Nikkei Asia, Tokyo will take the lead in compiling a road map to decarbonisation, set up a public and private investment and loan facility of $10 billion, and encourage the development of renewables and stronger energy conservation measures.

Late last year, the Indian government gifted one Kilo-class Submarine to Myanmar. This action by India, when combined with the big Infrastructure and connectivity push by Prime Minister Narendra Modi towards the Southeast Asian countries of Myanmar and Thailand under the Act East policy, becomes a big headache for Chinese plans to circle India.

On the other hand, the Japanese Prime Minister visited Indonesia and Vietnam and signed MoUs for the sale of Defense equipment among other things. The visit also had a big symbolic value, as Suga’s first foreign visit as PM was to the two major ASEAN countries. He even made remarks targeting Communist China’s bullying, but without naming anyone.

Read more: Japan openly provoked China but Xi chose to stay mum. There are 4 reasons for it

The US shyness in supporting the ASEAN nations has left many countries with no options but to kowtow to China. Cambodian Prime Minister Hun Sen earlier expressed his frustration at the lack of diplomatic options. “If I don’t rely on China, who will I rely on? If I don’t ask China, who am I to ask?” Hun Sen said in Nikkei’s Future of Asia conference this May.

“Cambodia should to find a way to balance relations between the two superpowers to maximize its political, economic and diplomatic returns,” wrote Kin Phea, director-general of the International Relations Institute of Cambodia at the Royal Academy of Cambodia, in an opinion piece published Monday by the state-run Agence Kampuchea Presse.

In such a contested situation, it becomes the moral imperative for India and Japan to increase their efforts multi-folds to make sure that the ASEAN nations can see them as alternatives and geopolitical options in the stead of the USA.