In a direct threat to the US, two Iranian warships have entered the Atlantic in a historic first 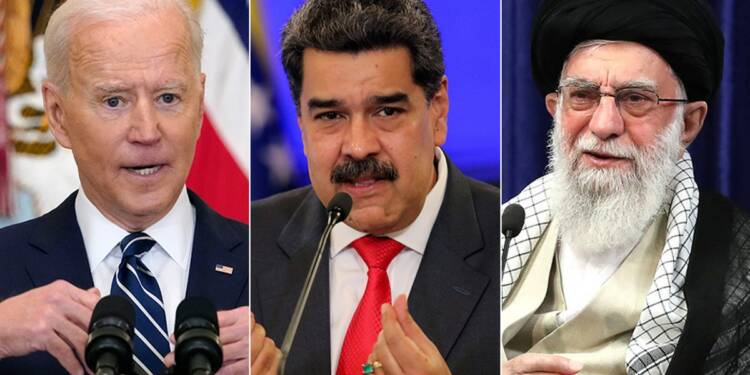 The Cuban Missile Crisis is often remembered as a defining moment in the Cold War between the United States of America and the erstwhile Soviet Union. In 1962, American ballistic missile deployments in Turkey and Italy – aimed against the USSR were countered by the Soviet Union shockingly deploying its own missiles in Cuba, sending the American defence establishment into an unprecedented tizzy. A similar situation is playing out now – but the only major difference is that the government of the United States is today working overtime to woo its enemies.

Russia is, to this very day, perceived as an enemy of the United States. However, there are bigger threats facing America today, which the Biden administration is sadly dismissing squarely. In fact, he is negotiating ‘deals’ with America’s enemies, thus, compromising the United States’ security perhaps like no other President. Only this time, the enemy happens to be Iran, before which the entire Biden administration is prostrating.

In a first, Iranian warships are poised to enter the Atlantic Ocean, cross it, and deliver supposed ‘weaponry’ to Venezuela. Tehran has threatened to send warships to the Western Hemisphere before but has aborted previous attempts. That Iran has now decided to break that tradition is an alarming development, especially since the journey by Iranian navy ships is being undertaken while the Biden administration, Iran and other parties negotiate a return to the 2015 nuclear deal in Vienna.

As reported by Politico, satellite imagery of the ship from early May provided by Maxar Technologies shows seven fast-attack boats aboard its deck. In this context, Pentagon spokesperson John Kirby noted that Venezuela purchased weapons from Iran over one year ago and warned that a new delivery “would be a provocative act and a threat to our partners in this hemisphere.” Kirby warned that the United States reserves the right “to take appropriate measures — in concert with our partners — to deter the delivery or transit of such weapons.”

The deployment of naval vessels is especially important now since chatter suggests that the nuclear deal could be finalised later this month or in July. It is no secret that Iran has been unequivocally demanding for all Trump-era sanctions to be lifted, something which Joe Biden has been reluctant to do in one go. Could it be that Tehran is warning Washington with its aggressive posturing in the Atlantic for this very reason?

It does seem so. Iran’s naval vessels passing through the Atlantic would be a big deal – reminiscent of the Cold War days, during which the Soviet Union would indulge in such muscle-flexing.  Earlier this week, Iranian officials stressed that their country has a right to operate warships in any international waters and warned the U.S. government against interfering with those activities, but did not confirm or deny any details about where Makran and Sahand – the two Iranian ships were headed or why.

Iran shares a very close friendship with Venezuela. According to the Wall Street Journal, ever since Hugo Chávez turned Venezuela into a dictatorship 20 years ago, Tehran has nurtured a very close relationship with Caracas. The two regimes have engaged in joint defence ventures in the Venezuelan state of Aragua, and Venezuela is known to supply fake identities to Iranian operatives to move around the region. So now, if Venezuela is a party to the Iranian Navy’s manoeuvres in the Atlantic, it should come as a surprise to close to nobody.

In 2016, Iran made a promise to develop naval capability in the Atlantic Ocean. Now, Tehran seems to have decided to make good on that promise, which is why Behnam Ben Taleblu, who watches the Iranian Military for the Foundation for Defense of Democracies think tank told CNN, “If this trip is successful … it doesn’t mean Iran will have a blue water navy right away, but it could represent a significant evolution in Iran’s conventional Navy, which has atrophied compared to the elite Revolutionary Guard Corps.”

The move by Iran shows just how helpless the Biden administration is – and how America’s adversaries are practically poking it in the face without fearing any consequences. Iran is looking to revive its image as a significant power after suffering severe setbacks recently, which range from the assassination of IRGC commander Qassem Soleimani last year to the most recent purported sabotage and drowning of the Iranian Navy’s largest warship in the Strait of Hormuz.

If the nuclear deal is brought back to life even in the face of the latest aggression by Iran – which by all counts is historic in nature, we will know as a matter of fact that Joe Biden does not have the best interests of America at heart.

Russia’s offer to Japan is quite simple, keep the US out and I shall be your friend