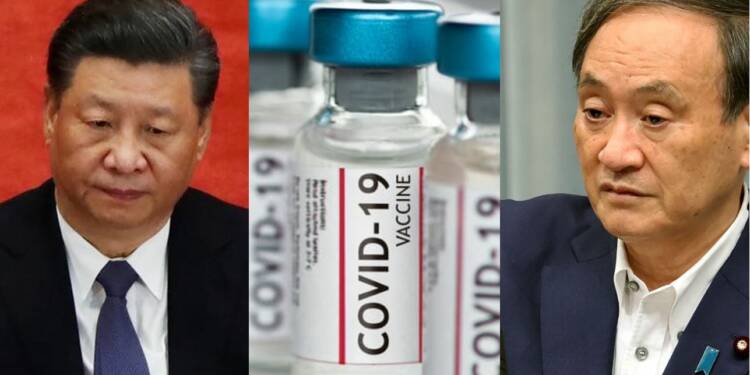 China had thought that it contained the narrative that was building against its catastrophic carelessness in communicating with the world about the Coronavirus. A big part of the tools that China applied to alter the narrative was the aggressive vaccine diplomacy. However, now it has started using the same vaccine diplomacy to arm-twist and intimidate countries and understanding the gravity of the situation, Japan has stepped up and is winning big in the vaccine wars. As these developments take place, China finds itself helpless and resorts to condemnation.

Japan delivered to Taiwan 1.24 million doses of AstraZeneca PLC’s (AZN.L) coronavirus vaccine on Friday for free, in a gesture that will more than double the number of shots the island has received to date. It comes at a time when China was forcing countries to opt-out of selling vaccines to Taiwan, and with the surge in cases, Taiwan was left to fend for itself with no vaccines in near sight.

Taiwan provided the most developed model to deal with the pandemic in the very early days. Notwithstanding its small size, it was willing to provide humanitarian medical assistance to countries all over the world. However, when it needed the world to come to its rescue, it seems to have abandoned Taiwan as it battles a severe COVID outbreak. But, when all seemed lost, Japan has come to the rescue and walked the talk when it comes to standing by the side of Taiwan at its time of need.

Read more: Japan steps up for Taiwan when no one else has. Jinping’s worst fears are confirmed

Taiwan is battling a spike in domestic infections and has vaccinated only about 3% of its population. Japan has agreed to procure more than 300 million doses of coronavirus vaccines from Pfizer Inc (PFE.N), Moderna Inc (MRNA.O) and AstraZeneca, more than enough to cover its entire population. “At the time of the great east Japan earthquake 10 years ago, people in Taiwan sent us a lot of donations quickly. I believe that is etched vividly in the minds of Japanese people,” Foreign Minister Toshimitsu Motegi said, announcing the vaccine donation. “Such an important partnership and friendship with Taiwan is reflected in this offer.”

Japan has not only stepped to fill the void and help Taiwan with vaccines. Going ahead, it is also planning to extend its own vaccine donations and outreach to countries in South East Asia as well as Pacific Island nations. Prime Minister Yoshihide Suga’s office is planning to ship the immunizations as soon as this month. According to the Yomiuri, the inoculations would be distributed outside of the Covax programme, a WHO-backed attempt to buy and deliver vaccinations to low- and middle-income countries.

According to the article, the government will offer the AstraZeneca vaccine to Malaysia and Vietnam because it has been approved by both countries’ health authorities. The number of doses will be established later, according to Yomiuri. According to the newspaper, Japan is considering making vaccines available to Pacific Island countries as part of a plan that could be disclosed during a teleconference summit later this month.