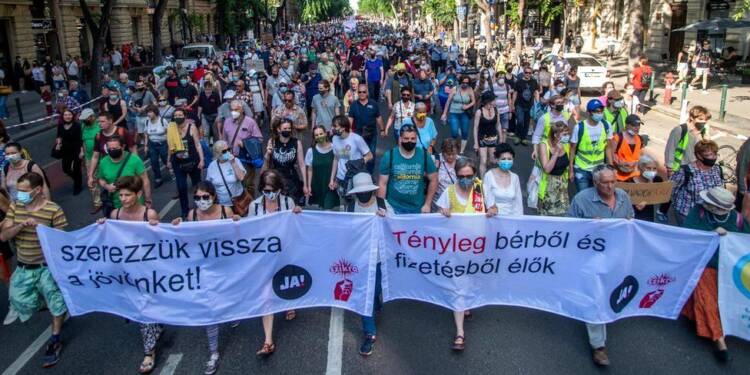 Thousands of Hungarians rallied on Saturday against a Chinese university’s intentions to construct a campus in Budapest, some brandishing banners reading “Treason.” Protests were made against the government who in recent years has become vehemently Pro-China, up to the extent of even blocking joint statements from the European Union which condemn China.

Nationalist Prime Minister Viktor Orban’s Liberal opponents accuse the country of cosying up with China, worrying that campus may undermine higher quality education and assist Beijing to enhance its influence in Hungary and the EU.

“I do not agree with our country’s strengthening feudal relationship with China,” Patrik, a 22-year-old student who declined to give his full name, said at the protest in the Hungarian capital. He said funds should be used “to improve our own universities instead of building a Chinese one.”

“Fidesz is selling out wholesale the housing of Hungarian students, and their future, just so it can bring the elite university of China’s dictatorship into the country,” the organisers of Saturday’s protest said on Facebook.

Near April, the government struck an agreement with Shanghai-based Fudan University to construct the campus on a site in Budapest where a dormitory village for Hungarian students had been planned previously. Fudan is a world-class university, the government claimed, and the campus will “allow students to learn from the best.”

Tamas Schanda, a deputy government minister, was reported by the MTI news agency as saying the protest on Saturday was pointless and dismissing “political hysteria” based on baseless rumours and media reports. Opposition politicians and economists have criticised the project’s high costs and lack of transparency, claiming that it will be prohibitively expensive. The mayor of Budapest is opposed to the plan.

Beijing claimed this week that “a few Hungarian lawmakers” were attempting to attract attention and block Chinese-Hungarian cooperation. Orban has developed friendly relations with China, Russia, and other authoritarian regimes while stifling the independence of scientific research, the courts, and the media. For the first time since taking power in 2010, he is up against a united opposition ahead of a parliamentary election in 2022.

A few days ago TFIGlobal had reported how four central roads in Budapest are being renamed, in protest of the upcoming Fudan university campus in the capital’s industrial zone. Budapest was to host Europe’s first Fudan university campus. Now, however, that deal going forward seems highly unlikely. Fudan University is a major public research university in China’s Shanghai. It is widely considered one of the most prestigious and selective universities in China. It was the first university to be independently established by the people of China in 1905.

“China and Hungary are worlds apart when it comes to human rights and solidarity,” said the Budapest mayor, who is a contender to unseat incumbent Hungarian Prime Minister Viktor Orbán in elections early next year. Free Hong Kong Road, Uyghur Martyrs’ Road, Dalai Lama Road, and Bishop XieShiguang Road are currently the names of four street signs at the site, the last of which refers to a martyred Chinese Catholic priest.

“The placards include the names of the personalities and people who have been persecuted by the Chinese Communist Party,” Budapest’s liberal mayor, Gergely Karacsony, said during a press conference alongside district mayor Krisztina Baranyi. This is… a 30-year commitment by Hungary to unity and freedom.”

Hungary is currently governed by a conservative administration that is warming to China for reasons unknown. In fact, Hungary was the only country to vote against a European Union declaration condemning Beijing of violating Hong Kong’s freedoms in early May. It has already obstructed an EU statement criticising China’s adoption of a draconian national security law on the formerly free city in April.

The Hungarian population appears to have had enough. Budapest mayor Gergely Karacsony, who is leading the charge for democracy, freedom, and liberty, appears to be on track to depose the pro-China government early next year.

House Speaker Donald Trump 2022: This could be a nightmare for the Biden administration