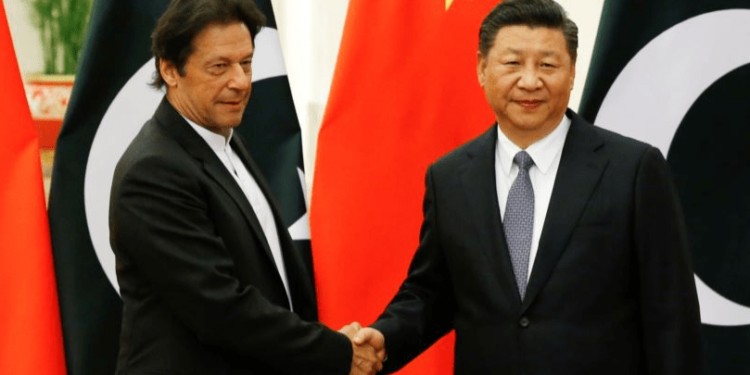 The Pakistani establishment is neck deep in debt and countries all around are demanding Islamabad to return the loans it has taken. In such a scenario, Imran Khan’s government and the Pakistani Army have become entirely dependent on the financial support of the Communist Party of China. In a situation when the nominally centrist media has been criticising the government as well as the activities of Beijing within Pakistan, China has made sure to use its leverage over the government of its colony, Pakistan so that its excesses are not reported.

A recent order by the Imran Khan government will now allow it to fine the country’s media a whopping Rs 2.5 crore if they failed to toe their line. People acquainted with the situation claimed on condition of anonymity that Pakistan and China are working on plans to establish a television channel and media organisation with the goal of gaining “information domination” and providing an alternative to the narrative of Western news media. By this way, the two governments are working in tandem to remove any sense of free press from the country and replace it with a narrative and propaganda machinery to put out news and views that cater to Xi Jinping and China.

The two countries are exploring the possibility of creating an organisation on the lines of Qatar’s Al-Jazeera or Russia’s RT network, complete with journalists of international stature, which would be backed by Chinese funding, the people said. According to the people, China’s internal dynamics preclude an open media (free press), but the country has financial muscle, whereas Pakistan’s internal dynamics favour such an organisation, but the country has financial resources, according to internal papers discovered by Indian security services.

Ever since the advent of the Imran Khan administration, the press freedom in the country has gone for a toss and has rapidly deteriorated. In fact, in October 2020, the EU Chronicle reported that the priority target of Pakistan’s military and Inter-Services Intelligence (ISI) is the country’s media, whose actions of intolerance towards independent journalism have increased dramatically since July 2018 – which marked the advent of Prime Minister Imran Khan.

Read more: All the Prime Minister’s men: Meet the China hawks in Morrison’s camp who have made life impossible for CCP

Pakistani journalist Asad Ali Toor in May was attacked by three masked men at his Islamabad residence and was subsequently assaulted. CCTV footage showed an injured Toor walking out of the apartment with his hands and feet tied, pleading for help. According to Toor, “Under this regime, we have seen a spike in the attacks on the journalists. The reason for this is because the state of Pakistan has done so many illegal things. Now they get frustrated because those illegal acts didn’t deliver.”

Such has been the systemic attack on free press in Pakistan that veteran journalist Hamid Mir was earlier this week stopped from hosting his popular talk show by Geo TV after he criticised the country’s powerful ”establishment” in the wake of the attack on Toor.

Pakistan’s powerful military has taken a number of efforts in recent months to browbeat and intimidate its detractors in the media. Geo News, one of Pakistan’s most-watched channels, removed popular TV anchor Hamid Mir from the air after he threatened to reveal details of his wife’s alleged shooting of a senior military official during a protest in Islamabad on May 29 against the assassination of a Pakistani journalist by intelligence operatives.

On one hand, the Imran Khan administration is turning a blind eye to the rapidly increasing attacks on the journalists (free press) where on the other hand it is slamming a heavy fine who dare question the Pakistan government. And couple these developments with the fact that Khan’s government is working with China to create a mega news establishment, which can work as the propaganda machinery and replace the current free press infrastructure, thus making sure that the excesses of China as well as Pakistan army are not reported and only the news which is favourable to them sees the light of the day.