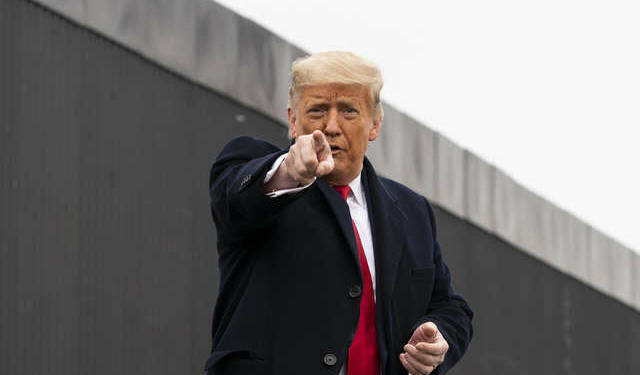 Donald Trump is planning to come back to the White House in 2024, and his primary agenda is clear. The biggest threat facing America’s, or dare we say, global freedom is undoubtedly big tech and left-leaning social media companies like Facebook and Twitter. Only recently, the brave country of Nigeria deleted Twitter indefinitely, after the left-leaning microblogging platform decided to mess with the African nation’s President. Twitter is now banned in Nigeria – in a move which has shown the world how such platforms need to be put in their place. Former President Donald Trump has now come out and openly supported Nigeria’s decision to ban Twitter.

In a statement released late Tuesday night, Donald Trump said, “Congratulations to the country of Nigeria, who just banned Twitter because they banned their President…More COUNTRIES should ban Twitter and Facebook for not allowing free and open speech—all voices should be heard.”

The former president’s attack on Twitter didn’t just end there. In fact, he made his future intentions very clear, as he said, “In the meantime, competitors will emerge and take hold. Who are they to dictate good and evil if they themselves are evil? Perhaps I should have done it while I was President. But Zuckerberg kept calling me and coming to the White House for dinner telling me how great I was. 2024?”

Twitter recently removed what it termed an ‘abusive’ civil war tweet on the part of the Nigerian president. The President had tweeted in the context of the 1967-70 civil war saying, “Those of us in the fields for 30 months, who went through the war, will treat them in the language they understand.” Twitter immediately marked it as abusive and suspended his account for 12 hours.

Subsequently, Twitter was banned in Nigeria because according to the African nation’s government, it was being used for activities that were “capable of undermining Nigeria’s corporate existence.” Donald Trump, after being accused of the January 6 mob violence at Capitol Hill was banned by almost all major social media platforms. While his Facebook ban will last for two years subject to extension, Twitter has put a lifetime ban on the 45th President who has made his intentions of running for White House once again abundantly clear.

A Trump administration 2.0 after 2024 would really ring the death knell of big tech companies and their ambitions of global digital colonialism. Needless to say, Trump hardly has any fondness for such hegemons, and he will come cracking down hard on the likes of Facebook and Twitter for their brazen practices which most often result in the silencing of conservative voices and opinions.

An outright ban on such companies cannot be ruled out. If not a blanket ban, Donald Trump would ensure that social media companies are rendered toothless and act only as platforms for users to say whatever they want to – because they have the right to. Donald Trump is said to be preparing for a re-run in 2024 already, and his recent message is rather explicitly clear – big tech’s digital hegemony will be brought to an end, no matter what it takes.

Earlier in January, the government of Uganda also banned all social media apps and platforms in the country, including Facebook, Twitter and WhatsApp citing the gross interference of such platforms in the country’s democratic process.  Recently, Twitter was brought to its knees by the Narendra Modi government of India for brazenly defying Indian laws.

Read More: House Speaker Donald Trump 2022: This could be a nightmare for the Biden administration

Besides, Twitter has been facing the heat in countries like Russia too. A Russian court on Thursday fined Twitter 19 million roubles ($259,000) for failing to delete content considered illegal by Moscow. Twitter has been subjected to a punitive slowdown in Russia since March. American big tech, as a matter of fact, has been receiving pushback from around the world. Whether it be countries like Australia, France, Poland, Germany, among others – all seem to have had just about enough of big tech high handedness.

Social media companies seem to have stretched their luck way too far, and their action against the Nigerian president followed by the country banning Twitter altogether have given Donald Trump the perfect precedent to ban such companies in the United States as well. Every step which big tech now takes could be leading them to their own grave.