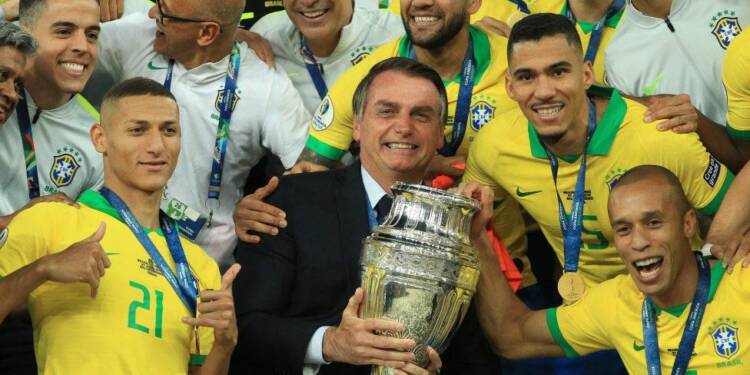 The Copa America will be held in Brazil next month, according to the South American Football Confederation (CONMEBOL), however, President Jair Bolsonaro’s chief of staff indicated ongoing talks could take until the next day to reach a formal resolution. The unexpected announcement, which means the competition will be moved from one South American coronavirus hotspot to another, means the world’s oldest international event will begin on June 13 and end on July 10.

The Brazilian economy is in tatters due to the devastation brought on by the Covid-19 pandemic. Jair Bolsanaro has failed to address the crippling economy or the health infrastructure of the nation which is in shambles. So, to give the economy a facelift and distract the people from his disastrous handling of the Pandemic, Bolsanaro is going full steam ahead even as the Pandemic ravages the rest of the country.

In comments to Brazilian media, Vice President Hamilton Mourao accepted the decision, noting that if there was no audience present, the pandemic would not be a problem. Later on Monday, Bolsonaro’s chief of staff, Luiz Eduardo Ramos, indicated that talks were underway and that there was “nothing certain” regarding the tournament’s possible relocation.

“The Brazilian government has shown agility and decisive thinking at a crucial moment for South American football,” CONMEBOL president Alejandro Dominguez said in a statement. “Brazil is in a time of stability, it has proven infrastructure and recent experience in hosting a tournament of this magnitude,” he added.

But the reality is far away from the comments of the CONMEBOL President. During the pandemic, the panelaços — the banging of pots and pans — became a socially isolated means for Brazilians to protest President Jair Bolsonaro. Hundreds of thousands marched in more than 200 towns across Brazil last weekend, a year after a severe coronavirus epidemic, to demand Bolsonaro’s impeachment. Signs read “fora Bolsonaro” (“Bolsonaro out”) and “genocida,” a reference to Bolsonaro’s mishandling of the epidemic, which has killed over 460,000 Brazilians, one of the world’s highest death rates.

Bolsonaro is doubling down in the face of criticism, as he always does. Bolsonaro proposed to host the Copa America competition after the original hosts, Argentina and Colombia, withdrew due to coronavirus outbreaks and political upheaval, respectively. “I have been saying since the beginning of the pandemic, I regret the deaths, but we have to live,” Bolsonaro said at the announcement. Around 60,000 Covid-19 cases and 2,000 deaths are being reported per day in Brazil.

Bolsonaro is being blamed by protesters. An official Senate investigation into Bolsonaro’s handling of the pandemic is now backing up their claims. The proceedings have turned into a public accounting of Bolsonaro’s carelessness, with testimony from a Pfizer executive who said the pharmaceutical company approached Brazil about procuring dosages last year and had no response for two months from Bolsonaro’s government.

These hearings take place while Brazil continues to see about 2,000 coronavirus deaths per day, with many expecting a third wave, and the public health system is on the verge of collapsing. Brazil’s vaccination programme is in shambles, and what is functioning is mostly happening despite Bolsonaro’s presence. According to research from Johns Hopkins University, only over 10% of the population is fully vaccinated.

Even the WHO has warned Brazil and Bolsanaro to avoid hosting the premier tournament. When asked about Brazil’s hosting of the Copa America soccer event, top World Health Organization official Mike Ryan said on Monday that any country hosting a large gathering should exercise utmost caution in managing hazards. Otherwise, a host country like Brazil should reconsider, according to Ryan, for the sake of safety and stopping the spread of COVID-19.

Bolsanaro’s own covid inquiry staffers have urged the President to not avoid hosting the tournament but Bolsanaro is going ahead with it. The only hurdle that remains is Brazil’s Supreme Court which is hearing petitions and considering halting the tournament in the nation.