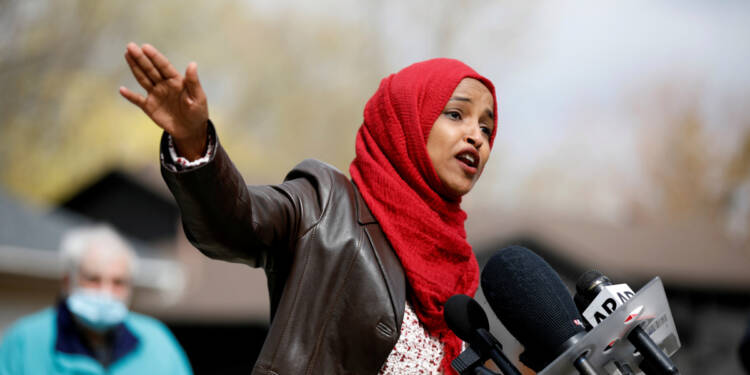 Far-left Islamist Ilhan Omar, for reasons best known to the Democratic party – is a member of the U.S. House of Representatives. What’s worse, she is also a member of the House Foreign Affairs Committee. As a radical anti-Semite, Ilhan Omar hates Israel from the bottom of her heart. Her hatred for the United States of America too is not particularly unknown, notwithstanding the fact that she is a Congresswoman. However, this time around, the far-left Islamist Democrat has gone too far, and her own colleagues are turning against her. Chances are Omar might not remain in the House Foreign Affairs Committee for long now.

On Monday, after a hearing of the all-important committee with Secretary of State Antony Blinken, Ilhan Omar tweeted a video of the proceedings in which she probed the Secretary of State Antony Blinken on his opposition to the International Criminal Court’s (ICC) investigation of alleged war crimes committed by US military personnel in Afghanistan, as well as the Israeli military in their conflicts against Arab militias.

In her tweet, the radical extremist masquerading as a Democrat made a preposterous comparison – and likened the United States and Israel to Hamas and the Taliban. “We must have the same level of accountability and justice for all victims of crimes against humanity. We have seen unthinkable atrocities committed by the US, Hamas, Israel, Afghanistan, and the Taliban. I asked @SecBlinken where people are supposed to go for justice,” Ilhan Omar said.

We must have the same level of accountability and justice for all victims of crimes against humanity.

We have seen unthinkable atrocities committed by the U.S., Hamas, Israel, Afghanistan, and the Taliban.

I asked @SecBlinken where people are supposed to go for justice. pic.twitter.com/tUtxW5cIow

The outrageous clubbing of the United States and Israel with terrorist organisations like Hamas and the Taliban drew widespread condemnation. Democrats themselves were shocked to see such comments being made by one of their own. A dozen House Democrats urged Rep. Ilhan Omar (D-Minn.) late Wednesday to “clarify” what she meant by her remarks. “Equating the United States and Israel to Hamas and the Taliban is as offensive as it is misguided,” the Democrats said.

Their joint statement added, “Ignoring the differences between democracies governed by the rule of law and contemptible organizations that engage in terrorism at best discredits one’s intended argument and at worst reflects deep-seated prejudice.” Even House Speaker Nancy Pelosi, while welcoming Omar’s clarification, of course, said that drawing “false equivalencies” between democracies like the US and Israel and groups that engage in terrorism like Hamas and Taliban “foments prejudice and undermines progress toward a future of peace and security for all.”

Read more: AOC, Ilhan Omar, Rashida Tlaib and Bernie Sanders: The faces behind the attacks against Jews in the US

In a clarification, Ilhan Omar said, “To be clear: the conversation was about accountability for specific incidents regarding those ICC cases, not a moral comparison between Hamas and the Taliban and the U.S. and Israel. I was in no way equating terrorist organizations with democratic countries with well-established judicial systems.”

However, the clarification did not come without a blistering attack against the somewhat patriotic Democrats. In a tweet, Omar hit back and slammed the Jewish lawmakers’ (Rep. Brad Schneider; who led the joint statement against Omar) comments as “shameful” and “Islamophobic tropes”. Her spokesperson Jeremy Slevin in a statement also said that the group of lawmakers were “ginning up the same Islamophobic hate against her” as far-right foes who initially attacked Ilhan Omar over her tweet.

Citing an open case against Israel, US, Hamas & Taliban in the ICC isn’t comparison or from “deeply seated prejudice”. You might try to undermine these investigations or deny justice to their victims but history has thought us that the truth can’t be hidden or silenced forever.

Ratcheting the boring ‘Islamophobia’ bogey, Ilhan Omar said in her tweet, “It’s shameful for colleagues who call me when they need my support to now put out a statement asking for “clarification” and not just call. The Islamophobic tropes in this statement are offensive. The constant harassment and silencing from the signers of this letter is unbearable.”

This time, however, Ilhan Omar has set out to make the wrong, and arguably, powerful friends. Due to her inherent antisemitic mindset, Omar has launched a tirade against the United States and Israel – and Democrats, who currently occupy the White House, are not having it. Ilhan Omar could well be on the path of losing her seat on the House Foreign Affairs Committee, and subsequently, her membership in the Democratic party.