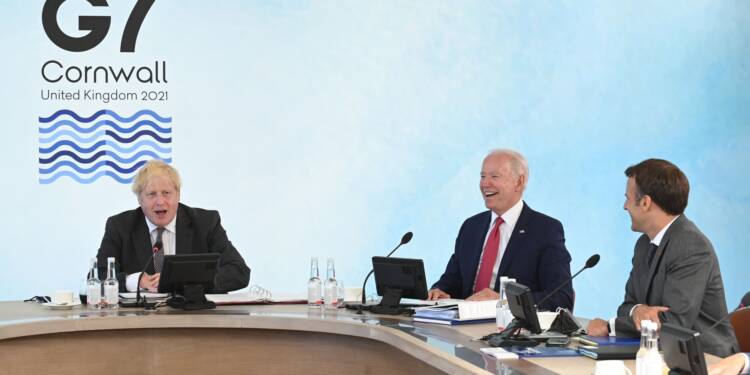 Joe Biden has been trying to somehow fit the Obama era foreign policy and working structures into the current timeframe. And after trying and failing miserably in every geopolitical region, be it East Asia, Eastern Europe, Middle East or even the larger Indo Pacific. However, after all these failures, and going easy on the USA’s adversary China for a very long time, Joe Biden and his administration has decided to tread the path laid down by his predecessor Donald Trump. Joe Biden along with the G7 members have decided to follow the blueprint of the Trump era Blue Dot Plan.

The G7 group of rich nations has agreed to establish an alternative to China’s Belt and Road Initiative, as part of a broader pushback against Beijing that includes human rights, supply chains, support for Taiwan, and demands for more data on the origins of the Covid-19 pandemic. In all this, the most interesting bit is the fact that it will be the Trump era policy of the Blue Dot Network which was launched under Donald Trump to encourage development by certifying public-private investments in global infrastructure that are transparent and high-quality.

Joe Biden since his arrival to office has gone very easy with China and has made a futile assessment that with this, he can bring Beijing to the discussion table and work things out. He downplayed Uighur genocide, even hinted that the sanctions will be removed and on top of that he even tried to justify the actions of the Chinese Communist Party in the very early days of his presidency. He consciously made Russia the bigger enemy and escalated the situation in Eastern Europe so that the narrative of the US public shifts away from China.

Biden, while speaking with CBS anchor Norah O’ Donnell on “Face the Nation”, showered praises on the Chinese President as if there was no tomorrow. “He’s very bright. He’s very tough,” Biden said, literally going head over heels for the Chinese President. Biden even went to the extremes of expressing a deep sense of pride about how he has a close and personal relationship with Xi Jinping.

Read more: Even as Biden heaps praise on Jinping and China, Jinping criticizes the US and its government in the crudest possible way

While Biden tried to change the narrative and use a flawed method to deal with China, the increasing discontent among its allies has forced him to follow Trump’s footsteps. Biden was reportedly pushing the other G7 leaders to take “concrete action on forced labour” in China and to include criticism of Beijing in their final communiqué, according to US officials. Japan also said it was backing a mention of Taiwan in the final statement.

Biden is also attempting to inject credibility into plans for a western alternative to China’s belt and road initiative, an infrastructure scheme launched in 2013 by President Xi Jinping that involves development, port, road, rail, and digital schemes from Asia through Africa to Europe. In order to keep G7 allies on board with his tough China strategy and to form new diplomatic alliances in Africa.

“This is not just about confronting or taking on China,” a US official said. “But until now we haven’t offered a positive alternative that reflects our values, our standards and our way of doing business.” The officials said the Build Back Better World(B3W) would be “an ambitious new global infrastructure initiative with our G7 partners” that would not only be an alternative to China’s belt and road initiative.

Biden has previously raised the idea of reviving a Trump-era plan for democratic countries to develop their own rival scheme with Boris Johnson in March. And now by touting the idea again in the G7 meeting, Joe Biden is proving that he is going to religiously follow in Trump’s footsteps.

As per news reports, Biden also pressed other leaders to make clear that they believe forced labour was an affront to human dignity and “an egregious example of China’s unfair economic competition” to show that they were serious about defending human rights, it was as if he has given up on his own approach and copied Trump era policy verbatim. “We’re pushing on being specific on areas like Xinjiang where forced labour is taking place and where we have to express our values as a G7,” the US official said of the final communique to be issued at the end of the summit on Sunday.