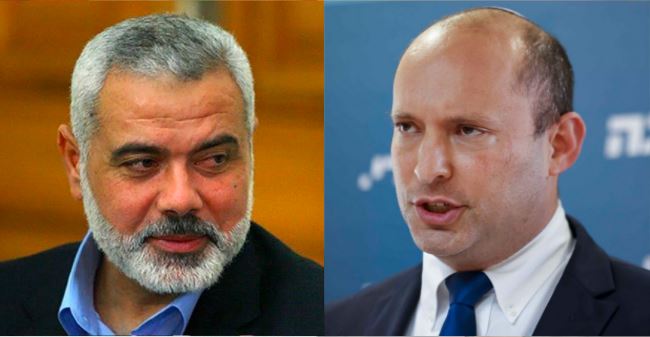 Benjamin Netanyahu’s ouster and change of government in Israel have emboldened the Jewish nation’s biggest enemy next door- Hamas. The Gaza-based Hamas has tested the waters with incendiary balloons that sparked at least 20 fires in Israel. Meanwhile, the Israel Defense Forces (IDF) struck “military compounds belonging to Hamas” in Gaza on Tuesday night in response to the incendiary balloons.

Hamas understood that it would receive a disproportionate response if it fires rockets at Israel. So, it decided to use incendiary balloons instead. The action was supposedly an act of retaliation to the so-called right-wing Flag March in Jerusalem. The incendiary balloons fired from Gaza are actually an attempt by them to remain involved. Primarily, the Flag March was used as a trigger point, but the real intention to check the Naftali Bennett government’s resolve.

What Hamas would have wanted is that the Bennett government neither retaliates nor speaks up about its’ provocation. However, an IDF spokesperson said, “A short while ago, warplanes raided military compounds belonging to Hamas, which were used as camps and meeting sites for terrorist operatives in Khan Yunis and Gaza districts.” The spokesperson added, “Terrorist activities have taken place inside the compounds.”

In a tweet, the IDF said, “The IDF is prepared for all scenarios, including renewed fighting, in the face of the continuation of terrorist acts emanating” from Hamas.

So, the incendiary balloons fired by Hamas did provoke a reaction from the IDF and the new government in Israel led by Prime Minister Naftali Bennett. The stand, approach and broad policy of the Bennett government has become somewhat clear with the prompt and swift response.

However, Hamas might be looking to exploit the faultlines in the rainbow coalition that has come to power in Israel after Netanyahu’s ouster. Bennett is himself of the nationalist, right-wing Yamina party. But Israel’s Deputy Prime Minister Mansour Abbas leads the United Arab List, and the Israeli Left too, is a part of the rainbow coalition.

Abbas and the Left might pull Naftali Bennett back from striking Hamas as ferociously as Netanyahu. In fact, Abbas-led United Arab List is actually sympathetic towards the Palestinian cause. So, Hamas is deliberately poking a needle and testing how deep it goes, with a new leader assuming power in Israel.

Hamas is getting emboldened after Netanyahu’s ouster. Even after the Israeli military warplanes raided Hamas compounds in Gaza, initial Palestinian reports claimed that no one got injured. Claiming no damage is uncharacteristic of Hamas, as it often tries to inflate the death toll on its side, in order to vilify Israel.

But this time around, Hamas wants to keep testing the Bennett government’s resolve. It wants to check just how fragile the incumbent coalition government, and if Israel’s enemies can drive a wedge in its constituents. Hamas wants to take advantage of Netanyahu’s ouster, and just like Iran, the Gaza-based terror group is also getting emboldened.

Hamas is looking to cross swords with the mighty IDF all over again. As the air raids on Tuesday night proved, there will be a response to Hamas’ provocations even with the Bennett government in power. But the organisation is doing all this in the belief that it can bring faultlines in the new Israeli government to the surface.

Hamas is testing the Bennett government for all of Israel’s enemies, including Iran. And Bennett faces a real test to continue protecting Israel while handling the rigours of a rainbow coalition.