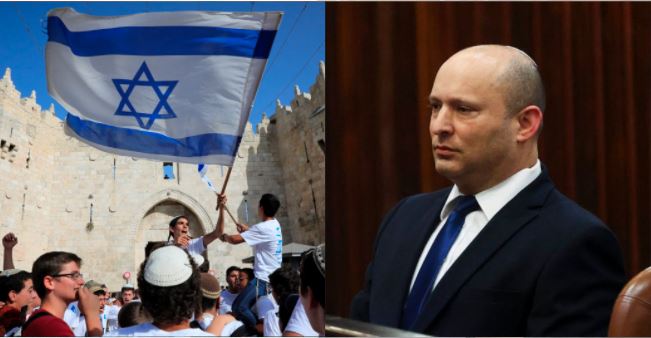 Naftali Bennett government has just come to power in Israel. But it is already facing a big test for survival. The flag march carried out by far-right Israeli nationalists on Tuesday through East Jerusalem is bound to shake the very foundations of the rainbow coalition government in Israel led by a right-wing Prime Minister, but supported by the Left and the Ra’am party led by an Arab leader Mansour Abbas, who is sympathetic towards the Palestinian cause.

So, long story cut short- Israeli PM Naftali Bennett allowed right-wing Israeli nationalists to carry out a flag march in Old Jerusalem, despite criticism by Abbas, and incendiary balloons and warnings coming from Hamas. Now, Hamas is likely to launch rocket attacks against the Jewish nation and any serious retaliation by the Israel Defense Forces (IDF) could rip apart the Bennett government.

The flag march, held on Tuesday, was originally scheduled to take place on May 10 to commemorate the  “Jerusalem Day” and celebrate Israel’s capture of East Jerusalem in the 1967 Middle East war. But it couldn’t be held on May 10 due to the Israel-Gaza skirmishes at the time.

After Bennett came to power, he couldn’t cancel the Tuesday flag march because he simply couldn’t afford to upset his right-wing voter base. So, thousands of Israelis marched in the flag procession.

Carrying Israeli flags, the crowds set off from Damascus Gate, which serves as the main entry point to the Muslim quarters in Old Jerusalem. The crowds reportedly chanted “This is our home” and “Jerusalem is ours.”

The procession was a significant event as its venue- Old City which is politically sensitive and houses the holy shrines considered sacred in Judaism, Islam and Christianity.

The move to allow the flag march did spur unfavourable reactions for Bennett from several quarters, both inside and outside Israel. Hours before the March, Hamas fired incendiary balloons into Israel that caused several fires in the Jewish nation. In its response, the Israeli military struck Hamas targets in Gaza.

Moreover, Hamas spokesman in Gaza Abdulatif al-Qanou’a too had warned that organising “the so-called flag march is just a detonator for the breaking out of a new battle in Palestine”. Before the March took place, al-Qanou’a had added, “The so-called flag march that is intended to be organised by the settlers on the streets of Jerusalem will lead to a new battle to defend the holy city and al-Aqsa Mosque.”

Inside his coalition government, Bennett faced opposition from Ra’am party head Mansour Abbas who called the March “an attempt to set the region on fire for political aims”. The remark was an attempt by Abbas to put pressure on Bennett and consolidate influence in the coalition government.

In fact,  Bennett actually faces a lot of pressure and after he came to power, the IDF too announced a significant reduction in West Bank ‘home-mapping’ operations. The Israeli Army said, “As of now, and in accordance with the current security assessment, the ‘structure-mapping’ activity will no longer be employed in Judea and Samaria (West Bank) except in unusual circumstances.”

The move signifies how the Ra’am party enjoys rising influence in the Bennett government and therefore Bennett cannot take bold security decisions, unlike his predecessor Benjamin Netanyahu due to political compulsions.

In this context, the recent flag march really tests Bennett. He had to approve the procession, albeit on an amended route determined by the Israeli police. In an apparent attempt to avoid friction with Palestinians, the police-charted route restricted participants from going through the Damascus Gate and entering the Muslim quarters of the Old City where holy shrines of Judaism, Christianity and Islam are actually located.

Bennett is already facing criticism for amending the route. A 50-year old marcher Doron Avrahami said, “Jerusalem is for all religions, but Jerusalem is in Israel. And in Israel, we must be able to go wherever we want, with our flag.” During March, Bennett’s name appeared on some posters along with the word: “the liar.”

So, the right-wing is already getting disillusioned with Bennett. Now, if Hamas actually gives effect to its warnings and issues a rocket attack against Israel supposedly in the aftermath of Tuesday’s flag march, then Bennett will have no solution but to let the IDF carry out a disproportionate retaliation.

At the end of the day, Bennett’s political popularity depends on nationalist Israelis who want to keep Israel secure from organisations like the Gaza-based Hamas and Palestinian Islamic Jihad. He simply cannot afford to let them down. This is why the incendiary balloons fired in by Hamas did provoke a response by the IDF on Tuesday night.

However, if and when, Bennett does hit back at Hamas with disproportionate force, the Ra’am party could simply break away from the incumbent coalition government. Make no mistake, Abbas is sympathetic to the Palestinian cause, and if there is a big flare-up between Hamas and IDF, the Bennett government could topple in a couple of days.