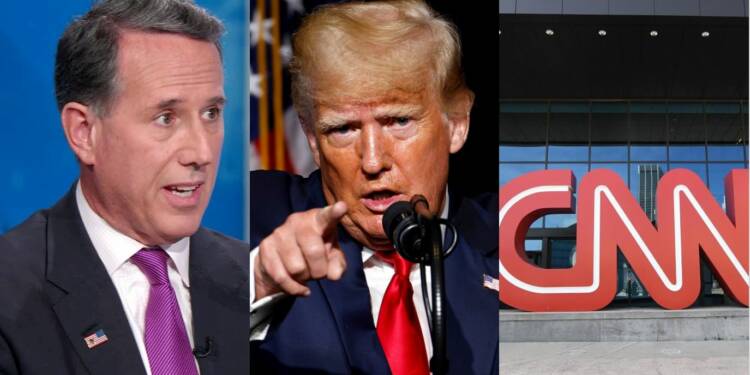 The left-liberal media houses among other similarly leaning organisations have a very bad history of using and throwing off their own allies and human resources as and when the time requires. If former President Donald Trump, whom Santorum has frequently criticised on-air, was still in power, CNN would not have fired him following inflammatory statements he made about Native American culture, according to Rick Santorum.

Santorum, a former Republican senator from Pennsylvania who ran for president in 2012 and 2016, said CNN had “evolved” in the last four years. Though he did not elaborate on the changes he has noticed at the network, Santorum has previously stated that his firing demonstrates “the Left’s intolerance” and “the cancel culture that is coming from it.”

While it is obvious that the network is scamming the people who watch it, the fact that they have no qualms about cutting off their own people adds to their bad character. Deception and building a whole narrative on it can be a very useful tool for any ruling dispensation to control its subjects, and if we look at the current Biden administration this looks to be working quite well even in America. Rasmussen Poll suggests that the viewers of liberal news channels like CNN and MSNBC do not know much about America’s crime stats. And going by the polls, the viewers of MSNBC and CNN are far more likely than Fox News viewers to get those facts wrong.

In the polarised situations, which America is facing, the people who support the Democrats are fed not the actual news by the mainstream media but the bias they want to see, and the half facts and half-truth that can justify their belief in the current government and that can make them confident in their support for the current government. Half of likely US voters who said CNN or MSNBC was their favourite cable news outlet believe more than 100 unarmed African Americans were fatally shot by police in 2020, according to a new Heartland Institute and Rasmussen Reports survey. However, only 22% of Fox News viewers believe police shot more than 100 unarmed black people last year.

“Once the value that I brought to the network was less because Trump wasn’t in the news very much anymore, they decided it wasn’t worth it. The juice wasn’t worth the squeeze,” Santorum told the Washington Examiner at the Western Conservative Summit on Saturday. Despite Santorum’s on-air apology, CNN host Don Lemon slammed him, asking, “Did he actually think it was a good idea for him to come on television and try to whitewash the whitewash that he whitewashed?” Santorum was handled differently by CNN than legal expert Jeffrey Toobin, who returned to on-air commentary after an eight-month suspension for exposing himself to colleagues on a Zoom conversation.

After joining the network as a contributor in January 2017, Santorum and CNN cut ties last month after he received backlash for saying at a conference that “there isn’t much Native American culture in American culture” while talking about America’s founding documents. He later said that he misspoke and did not intend to minimize Native American culture. Santorum declined to comment on the Toobin situation directly. “I am not going to be critical of giving people second chances,” he said. “At the same time, people have to be held accountable for their behaviour. … It’s a balance.”