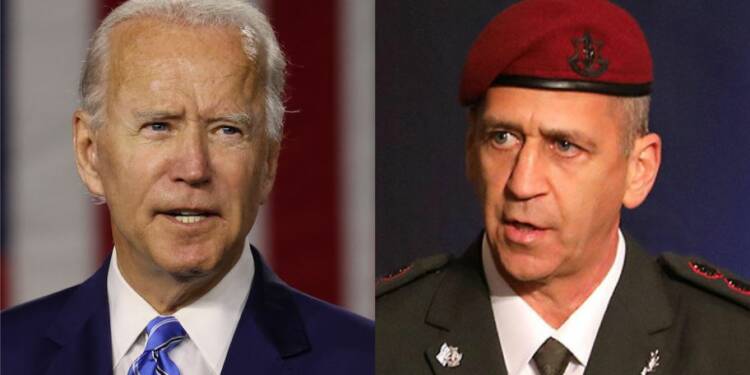 The Biden administration doesn’t seem to able to get rid of its irresistible urge to pursue the Iran nuclear deal. The 2015 Joint Comprehensive Plan of Action (JCPOA) was a disaster because it allowed Tehran to expand its nuclear programme while bypassing American sanctions. Yet, Biden wants to resurrect the 2015 deal despite Israeli opposition, and now the Israel Defense Forces (IDF) chief is issuing a final warning to the US about the Iran nuclear deal.

IDF Chief of Staff Lt.-Gen. Aviv Kohavi has warned US officials against rejoining the 2015 Iran nuclear deal, while in Washington to discuss the threat posed by Iran’s nuclear ambitions. Now, it is a very rare move for an IDF chief to criticise US foreign policy, given the close alliance between the US and Israel. But the situation is such that Israel is constrained to issue an open warning to the US.

IDF Spokesperson’s Unit issued a statement reading, “The Chief of the General Staff emphasized the shortcomings of the current nuclear agreement that will allow Iran to make significant progress related to centrifuges as well as to substantially enhance the amount and quality of enriched matter over the next few years, also emphasizing the lack of supervision in terms of nuclear proliferation.”

The statement also disclosed that Israel’s top military officer “explained the threat created by returning to the original nuclear agreement and emphasized that all measures should be taken to prevent Iran from achieving military nuclear capabilities.”

Lt.-Gen. Aviv Kohavi is on a four-day visit to Washington and is holding meetings with top Biden administration officials, such as Secretary of Defense Lloyd Austin, National Security Adviser Jake Sullivan, Chairman of the Joint Chiefs of Staff Mark Milley, head of the US Central Command Gen. Kenneth McKenzie, and head of the US Special Operations Command (SOCOM) Gen. Richard Clark.

The IDF chief is maintaining a strong position and making it clear that he views a return to the 2015 Iran nuclear deal as dangerous. In January, he had directed the IDF to prepare fresh operational designs for targeting Iran in order to hinder its nuclear ambitions, if necessary.

And Lt.-Gen Kohavi’s public criticism of American foreign policy over Iran suggests that the IDF chief is going to push for the cancellation of the 2015 nuclear deal.

On his part, the IDF chief has a lot of experience on his hands. Only recently, he led the Israeli military during the Gaza war against Hamas and other militant outfits. He is therefore likely to overpower Biden administration officials. In fact, Lt.-Gen Kohavi is asserting Israel’s position, just like former Israeli Prime Minister Netanyahu used to do.

What the IDF chief is doing in Washington also reflects Netanyahu’s legacy. It shows how a military official who worked in the Netanyahu-era can push Israel’s position with calibre and strength.

On the other hand, the Naftali Bennett government is clearly letting the IDF chief push Israel’s position in the US, because even the incumbent Prime Minister in Israel wants to continue Netanyahu’s legacy. If the Bennett government fails to push back against the Iran nuclear deal, then it would amount to a political suicide and a strategic nightmare.

It is strategically crucial for Israel to sabotage Iran’s nuclear ambitions, while warning the United States against the devastating consequences of returning to the 2015 Iran nuclear deal. Presently, Iran is trying to extract maximum concessions out of the US, as a precondition for reviving the JCPOA.

The ball is truly in Biden’s court and therefore Israel has to raise the stakes in order to deter Biden from returning to the 2015 nuclear deal. The present warning from the IDF Chief of Staff Lt.-Gen Kohavi is a bigger one than all of Israel’s past warnings. IDF chief’s warning to the US is both final and consequential. And it seems that Israel is going to do all it takes to cancel the Iran nuclear deal.