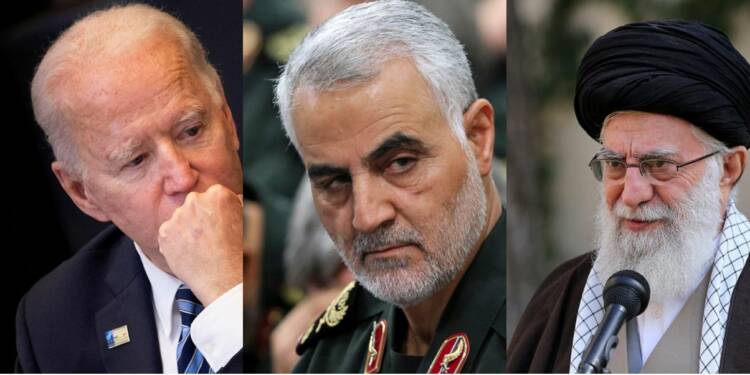 The US House of Representatives passed a resolution on Thursday removing the almost two-decade-old authorization for the use of military force against Iraq, which has been used by presidents to justify military action in the Middle East without consulting Congress ever since.

Since assuming office US President Joe Biden has been trying to placate and appease Iran. The Biden administration keeps doing so because it needs to push its foreign policy agenda which looks like an extension of the Obama-era foreign policy. By trying to placate Iran, the US expects it to resume the JCPOA deal which former President Donald Trump pulled the US out of. By repealing the 2002 military authorization the Biden administration is once again trying to send a message to Iran that the US is ready to go to any extents to win back Iran’s affection. Incidentally, this was the same authorization that was used to order an airstrike that killed Iranian Gen. Qassem Suleimani in Baghdad without consulting congress.

Rep. Barbara Lee (D-Oakland) introduced H.R. 256, which would rescind the 2002 Authorization for Use of Military Force Against Iraq Resolution. Lee was the only member of Congress who opposed the president’s initial broad power to use military force in response to the terrorist events on September 11, 2001. She’s been trying for 19 years to reassert Congress’ constitutional authority to declare war, as part of a long-running power battle between the executive and legislative branches.

Lee has previously included repeal of the authority in key defence budget measures, and it has even cleared the House a few times before succumbing to Senate opposition. But now it appears like the tide is turning in her favour. The White House revealed earlier this week that, for the first time, a sitting president favours repealing the 2002 authorization, claiming that it will have “likely minimal impact on current military operations.”

According to The Los Angeles Times, Lee thinks that President Biden’s endorsement would help the bill pass the Senate. “If the president said he doesn’t need it and this is long overdue, then why would the members of the Senate want to not support repealing it?” Lee said. “The war is over, so I can’t imagine the argument for supporting maintaining the use of force as it relates to Iraq. It has no impact on current military operations at all.”

Senators Tim Kaine (D-Va.) and Todd Young (R-Ind.) are shepherding a bill through the Senate that repeals the 2002 authorization as well as the 1991 authorization, which is still in existence and opened the way for the first Persian Gulf War. The bill’s supporters hope to have it on Biden’s desk by September.

In a statement, Young said that ending the president’s ability to act without Congress’ explicit consent is “as important as any decision to wage war.” Only one of the four authorizations for the use of military force approved by Congress under the War Powers Act of 1973 has been rescinded, and it is linked to activities in Lebanon in 1983.

“Congress must assert its rights as a co-equal branch of government and ensure that our brave men and women in uniform are sent into war with the full backing and support of the American people’s elected representatives in Congress,” Young said.

The Senate Foreign Relations Committee is set to vote on the Senate version of the repeal next week. Kaine has stated that he hopes it will be debated on the Senate floor later this summer, in time for the 20th anniversary of the September 11 terrorist attacks. Senate Majority Leader Charles E. Schumer (D-N.Y.) said on Wednesday that the resolution will be voted on this year and that he favours revoking the 2002 authorisation for the first time.

Outside groups and lawmakers who have previously opposed repeal have largely remained silent this time. It’s critical to get it off the books because future presidents might exploit the open-ended authorisation, according to Schumer. The Iraq war ended in 2011, but the authority was invoked again in 2020 when Trump referenced it as part of his reasoning for not contacting Congress before authorising an airstrike in Baghdad that killed Iranian General Qassem Suleimani.

Legal scholars and international policy professionals questioned whether the use of the authority was appropriate. However, several Republicans remain opposed to repeal. On Thursday, Senate Republican Leader Mitch McConnell of Kentucky called the 2002 authority “a crucial legal underpinning” for combating terrorist groups with ties to Iraq, and said repealing it would be “reckless.”

Since taking office, Biden has pushed for a revival of the Iran nuclear accord. Despite Iran’s unilateral quest for nuclear enrichment for weapons that the US admits it has and can start producing in a week or two, his administration has held direct and indirect negotiations with the country.

It’s not only that the Biden administration has surrendered. Even the Iranian side has taken advantage of this extended period of debate to humiliate the US and send a message to it whenever and wherever feasible.

TFIGlobal stated on June 5th that Iranian warships were preparing to enter the Atlantic Ocean, cross it, and transport alleged “weaponry” to Venezuela in the first. Venezuela is a country that has been subjected to US sanctions.

According to the Pentagon, an “unsafe and unprofessional” encounter occurred in the Strait of Hormuz on May 10th, when a US Coast Guard cutter fired two rounds of warning shots at a group of Iranian speed boats. The high-speed incident, which featured 13 Iranian Islamic Revolutionary Guard Corps Navy (IRGCN) vessels and took place in a restricted area, was termed “significant” by Pentagon press secretary John Kirby.

These instances, as well as the current measures of the Biden administration in response to them, demonstrate how Iran was simply biding its time, embarrassing the US wherever it could while enriching its nuclear stockpile to levels well exceeding the JCPOA’s threshold.

Now, with the repeal, Biden is once again trying to woo Iran. But once again Iran will use this opportunity to humiliate the United States and have its own way.

Russia snatches Myanmar from China in one swift move