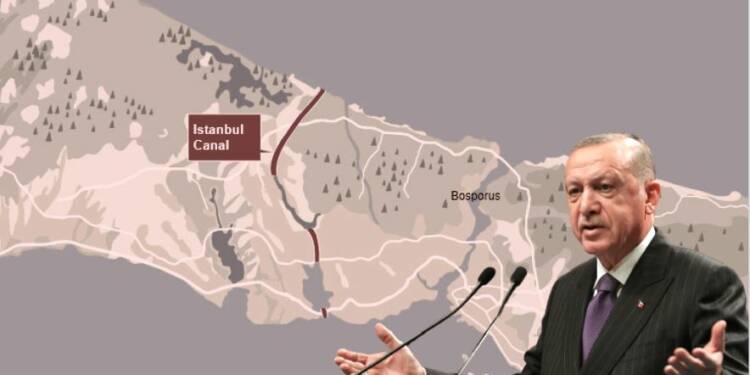 Turkey’s President Recep Tayyip Erdoğan is an ambitious fool, whose impractical projects are bound to jeopardise his nation and ignite a war from all sides. Erdoğan now wants to revive a medieval-era project called the Istanbul Canal with the aim of controlling the Black Sea. However, the project is likely to antagonise all major powers, and ignite military tensions on all sides.

Erdoğan’s idea of the Istanbul Canal is really a megaproject with strategic implications. The Turkish President, on his part, wants to revive it purely for domestic reasons and for appealing to the sentiments of hardline Turkish nationalists. Turkey would gain complete control over transit into the Black Sea, whereas powers like Russia, the US and the European Union would get enraged over Turkey’s complete control in the strategically significant region.

The Istanbul Canal was a part of Ottoman plans since the mid-16th century. Many Ottoman Sultans wanted to build it, but it simply couldn’t materialise. So, in 2011, Erdoğan announced that the Canal would be established in what was interpreted as an attempt to invoke the Ottoman glory.

The Istanbul Canal is too ambitious a project. It will be 50 kilometres long, around 150 meters wide and 25 meters deep. At an estimated cost between $12.7 and $25 billion, the Canal will be the largest ever construction project undertaken by the ruling AKP regime in Turkey.

A number of reasons are given for undertaking the ambitious project, such as reduction of traffic in the Bosporus, urbanization activities in parts of Istanbul and lesser shipping accidents. Also, it is argued that the project will bring more prestige and revenue for Ankara. But at the end of the day, everything boils down to geopolitics and Erdoğan’s ambitions to exercise control in the Black Sea.

Till now, Turkey feels that it has not been able to capitalise upon its geographical position, as a country that sits at the crossroads of European powers and Russia. As for the Bosporus Strait, transit through this narrow passage of water is governed by a 1936 treaty called the Montreux Convention.

The Montreux Convention came into effect in 1936, when the USSR was very dominant, Europe was declining in the post-World War I era and the US had zero interest in international politics. Within Ankara, it is felt that the Convention undermined Turkey’s sovereignty over the Bosporus Strait.

As per Russia’s TASS news agency, the Convention “enshrined free passage through the straits of Bosporus and the Dardanelles for trade ships only. Meanwhile, it significantly limits the class and displacement of military ships for non-Black Sea nations. Black Sea nations may move military ships of any class through the straits during peacetime by notifying the Turkish authorities beforehand.”

So, basically, the terms of the Montreux Convention imply that all non-military ships can transit the two Turkish Straits in times of peace. As for military ships, a distinction is drawn between non-Black Sea states and Black Sea states, namely Bulgaria, Romania, Ukraine, Russia, and Georgia.

But times have changed. Turkey is today led by a radical President with expansionist tendencies. As a part of his hawkish foreign policy, Erdoğan wants to exercise full control of the Bosporus Strait, and keep all other powers at bay when it comes to accessing the Black Sea or exiting the Black Sea via the said Strait. The construction of the Istanbul Canal is a means for Ankara to bypass the Montreux Convention.

Any such Canal will have massive implications in the region. The Istanbul Canal will be a matter of national pride and carry a lot of strategic importance for Turkey. The Montreux Convention gives almost equal influence to both Russia and Turkey, which will not be the case with the planned Istanbul Canal.

And given Erdogan’s belligerence, Turkey could even try to play aggressor in the Black Sea region in order to expand its naval boundaries. There are way too many possibilities that open up for Ankara.

On the other hand, other major powers won’t let Erdoğan pursue his Ottoman glory ambitions without any opposition. First of all, Moscow will pushback against any Turkish attempt to completely bypass the Montreux Convention and effectively undermine Russia’s position in the Black Sea.

The West also understands how growing Turkish influence would be a matter of concern. Right now, nine non-Black Sea warships can transit the Bosporus Strait in times of peace but Turkey wants to take away this right to access for Western powers. Ultimately, both Russia and the Western world will hit back against Turkey and Erdoğan is clearly exposing his nation to be attacked from both sides.