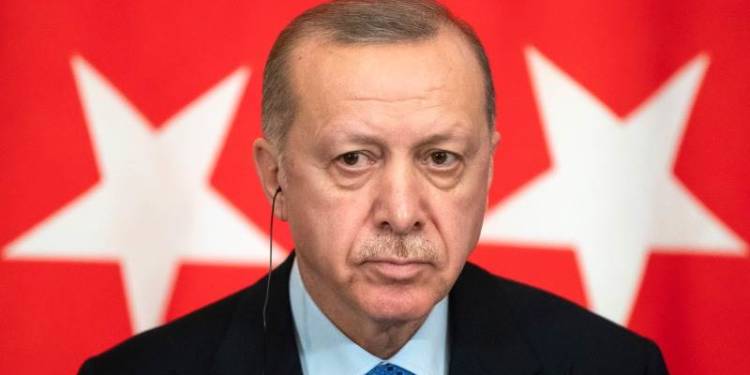 Turkey’s warmonger-Islamist President Recep Tayyip Erdoğan is about to put his country through a lot of trouble. Erdoğan’s Caliphate ambitions and endless wars have created far too many enemies than what Ankara can afford. This suggests that Ankara is going to face some tough days ahead that could ultimately test its ability to sustain in the face of a deep crisis. What was once a respectable NATO State is now becoming a pariah country.

France, Russia, India, the UAE, the US and Turkey’s fellow East Mediterranean countries- Israel, Egypt, Greece and Cyprus, all major global and regional powers are breathing down Turkey’s neck.

Turkey’s latest troubles started in its own backyard- the Eastern Mediterranean. Of late, Turkey has been crossing swords with Greece and Cyprus by regularly transgressing into their waters and also staking a claim on their Continental Shelves. Erdoğan’s lust for a broader maritime territory and exploration of resources in the Eastern Mediterranean has led to bitter conflicts between Turkey and Greece.

Initially, it seemed that Turkey would get away with its bully tactics. But then Athens played some smart moves that have caught Ankara napping. Greece signed EEZ agreements with Italy and Egypt, thereby bringing the UN Convention on the Law of the Sea to the Eastern Mediterranean and firmly establishing its legitimate Exclusive Economic Zone in the region.

Meanwhile, France and the UAE have also joined in and are supporting Greece’s right to defend itself from Turkish transgressions. A couple of weeks ago, French President Emmanuel Macron decided to increase deployment in the Eastern Mediterranean, while asking Ankara to hold back its exploration work in the disputed waters. Consequently, two Rafale fighter jets and a naval frigate- ‘Lafayette’ were dispatched to counter the growing Turkish threat to Cyprus and Greece.

Now, Paris is also joining in military exercises in the Eastern Mediterranean alongside Italy, Greece and Cyprus. French Defence Minister Florence tweeted, “Our message is simple: Priority for dialogue, cooperation and diplomacy so that the eastern Mediterranean becomes an area of stability and respect for international law.”

Meanwhile, the United Arab Emirates has also taken some initial steps for countering the Turkish threat to the Arab leadership of the Muslim world. The UAE Air Force is reportedly sending four of its F-16 warplanes to the Greek island of Crete for joint training with the Hellenic Air Force.

But this is not it, as Turkey is also facing pushback from the Jewish country of Israel. Tel Aviv is a major stakeholder a pipeline deal (EastMed) to move gas offshore via Cyprus to Greece and Europe. Needless to mention, the 1,900-kilometer gas pipeline project connecting Europe to the Eastern Mediterranean basin gas fields militates against Turkish expansionism in the Eastern Mediterranean.

Israel is more than ready to take Turkey to the cleaners, as the Jewish country’s intelligence agency- Mossad now considers Ankara and not Tehran as its biggest security threat. Moreover, the ties between the two countries have also soured because Erdoğan wants to “liberate” the Al-Aqsa Mosque, a disputed holy site in Jerusalem claimed by both Jews and Muslims. Also, Erdoğan supports terror organisations like Hamas in Palestine which compels Israel to do to Turkey what it has been doing to Iran all this while.

And now even the US seems to be jumping into the Eastern Mediterranean. The US Secretary of State recently warned his Turkish counterpart Mevlut Cavusoglu to reduce tensions in the region. Pompeo had a “timely conversation” with Cavusoglu in which he stressed on the “urgent need to reduce tensions in the Eastern Mediterranean.”

Timely conversation with Turkish Foreign Minister @MevlutCavusoglu in Santo Domingo today on the urgent need to reduce tensions in the Eastern Mediterranean. pic.twitter.com/pAl0BHPOtz

While Turkey is surrounded from all sides in the Eastern Mediterranean, Russia is reversing the Turkish advances in Libya. Moscow is believed to have brought either the S-300 or the S-400 air defence system to the war-ravaged Libya, which can unleash hell on the Turkey-backed Muslim brotherhood forces.

Turkey was bound to face this pushback. Not only is Erdoğan making unilateral claims in the Eastern Mediterranean and supporting a highly Islamist regime in Tripoli, but he is also constantly insulting the West and the Christian world by reconverting ancient Cathedral-turned Ottoman Mosques-turned Museums into Muslim places of worship, including the Hagia Sophia in the present-day Istanbul. The West has, in turn, hit back where it hurts the most.

Apart from Europe, the US and West Asia, Erdoğan is also making an enemy out of India. Recent intelligence reports suggest that Turkey is the biggest enemy of India after Pakistan when it comes to Islamist radicalisation. Ankara is anyway known to antagonise Indian interests and even last year, the wannabe Khalifa had taken Pakistan’s side over Article 370 abrogation.

Now, New Delhi could be looking to hit back at Ankara through security cooperation with Turkey’s other enemies as well as the imposition of stringent economic measures to punish Turkey.

Erdoğan had promised Turkey a return to the Ottoman brutality with his political Islam, but today Ankara stands diplomatically isolated. It has isolated everyone including the Arab Muslims. Only failed States like Pakistan are trying to support it, which doesn’t have much importance in international relations. Meanwhile, the Turkish economy is already in the doldrums and Turkish President’s warmongering isn’t going to help. Turkey would face bad days ahead and unprecedented misery.