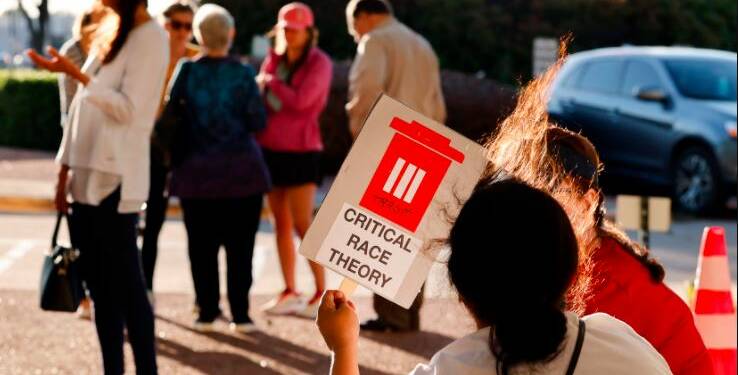 A lie seldom lasts long, even if it is sold vigorously. It is something that is universally true but still those who want to gain absolute power forget and follow the same path. In the USA the left-liberal combine has been pushing the racial divide for their political benefit, the latest weapon in their arsenal being the Critical Race Theory (CRT). However, as more and more people are becoming aware of the poison it is instilling in small children, the parents are taking a non-compromising stand against it. Now it is not just the white parents but also the black parents who are speaking out against the Critical Race Theory. They have first-hand experience of what was being taught in schools during the pandemic and how adversely it will impact the next generation.

Basing their fears on this reality, they are targeting teachers who teach this and some have even refused to send their kids to school until CRT is removed from the curriculum. Through CRT, it is visible what the next generation of children are being indoctrinated with, and which is far from any sensible reform or progressive policy. Lesson plans have been emerging which teach children to see themselves through their skin tones and indoctrinate them to view history as well as American jurisprudence not as it is or was, but from a perspective that is centred strictly around their race.

Recently, a concerned mother, Keisha King, demolished CRT during a Florida school board meeting, arguing that CRT is racist. “Telling my child or any child that they are in a permanent oppressed status in America because they are black is racist, and saying that white people are automatically above me, my children, or any child is racist as well,” King righteously pointed out, “This is not something that we can stand for in our country.” She was joined by another angry parent this week in a video that went viral making similar points and since it has been reported by many portals.

“How do I have two medical degrees if I’m sitting here oppressed?” pic.twitter.com/gmCRJaphXt

President Biden rescinded the Trump administration’s executive order prohibiting critical race theory, one rooted in Marxism, training for federal agencies and federal contractors on his first day in office. This is a heartbreaking reversal for Americans who are committed to colour blindness in public life. While the President’s order is legally binding at the federal level, state legislators can still intervene.

The US values have for long been to not pay heed to one’s race, colour or any social he or she belong to, but what that person is worth individually. This beautiful idea has laid the foundation of a country that may have racist tendencies, but compared to the contemporary world, it is the best the world has, for a globalised society. And while the government of the day has bowed to the Marxists and leftists, it is the black parents who are coming out to call a spade, a spade.

Read more: Anti-Communism runs in the veins of the USA and it is what makes the USA great, but Biden is changing it

Liberals and politicians are attempting to portray these parents as opposing the teaching of slavery and Jim Crow in schools. That is simply not the case. Every viral speech by a parent speaking out against CRT demonstrates how well they understand it and why it is harmful to their children.

Some of the most powerful speeches have come from black parents, such as Quisha King in Duval County, Fla., who argued, “Telling my child or any child that they are in a permanent oppressed status in America because they are black is racist.” Illinois father Ty Smith said, “How do I have two medical degrees if I’m sitting here oppressed? . . . How’d I get where I am right now if some white man kept me down?”

Indeed, CRT isn’t a curriculum, it is a framework. In this framework, all the academic subjects are taught through the lens of race. As reported by NYPost, Math, for example, long considered a strictly egalitarian subject, is now racist. The Oregon Department of Education sent a toolkit to middle-school teachers in February alleging that the focus on getting the right answer, and making students show their work, was “white-supremacy culture.” California took things a step further in May, introducing a draft framework for teaching math that prioritises “equity” over, you know, quantitative reasoning.

The pushback is gathering momentum, even so, and it isn’t just white families protesting. Keisha King, a black mother from Duval County, Florida, warned her state’s board of education that telling a minor child that he is the victim of oppression is “the essence of holding a child back.” It is these black parents who one should be listening to, not Democratic operatives and their representatives in the mainstream media.