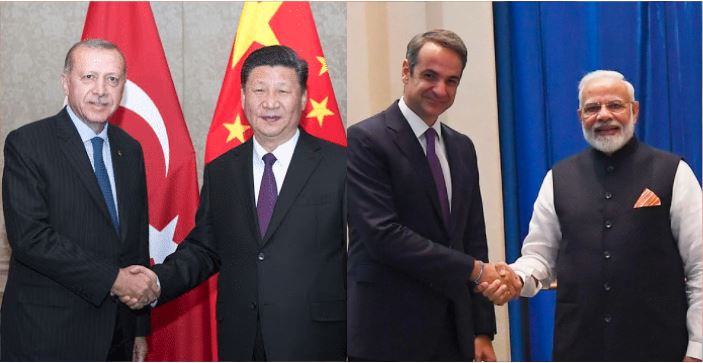 India is making a sharp diplomatic manoeuvre in the Eastern Mediterranean, by befriending Greece. India’s External Affairs Minister Dr. S. Jaishankar met his Greek counterpart Nikon Dendias during a bilateral visit. This is the first time in 18 years that an Indian Foreign Minister has visited Greece for a bilateral meeting.

New Delhi is seemingly looking to kill two birds with one stone by warming up to Athens. Greece is a partner in China’s Belt and Road Initiative (BRI)- a cross border infrastructure that India wants to undermine. Also, Greece is a victim of Turkish belligerence which brings New Delhi and Athens on the same page when it comes to the object of confronting Turkish belligerence.

As India’s External Affairs Minister met his Greek counterpart in the Eastern Mediterranean nation, the two sides discussed “geo-political and geo-economic realities, including the Indo-Pacific.” An official readout disclosed that both the countries acknowledged “the convergence of each others’ vision for a free, open, inclusive and cooperative Indo-Pacific ensuring connectivity and growth for the region.”

The discussion about a “free, open, inclusive and cooperative Indo-Pacific” is vital from India’s point of view. The Indo-Pacific vision that the two sides discussed is directly aimed at curbing growing Chinese aggression and belligerence in the region. This is a very important outcome that should send warning bells ringing for China.

Greece remains a vital link in Chinese President Xi Jinping’s BRI ambitions for the European Continent. In fact, Chinese shipping firm Cosco has also taken a majority stake in Greece’s Piraeus port, which serves as a link between Asia and Europe. The Chinese State media celebrates the Piraeus port in Greece as “an example of a BRI success story.” China, therefore, values its BRI investments in Greece.

Therefore, by roping in Greece into the Indo-Pacific, New Delhi is signalling that if push comes to shove, it can damage China’s BRI ambitions in the Eastern Mediterranean. Also, the BRI is losing most of its appeal. Countries have been backtracking on BRI agreements because of the exploitative terms and high proportion of debt associated with the China-funded projects. Greece too won’t be feeling very secure in its status as a BRI partner.

So, if Greece wants to secure the support of other powers against Turkish activities, it would have to push for a free and open Indo-Pacific as well. Accordingly, Indian and Greek Foreign Ministers also discussed developments pertaining to Eastern Mediterranean, Cyprus and Libya. Ankara wasn’t directly mentioned, but the content of the discussion pointed out that they were concerned about Turkish aggression in these regions.

Other subjects of discussion included the importance of rule of law and respect for sovereignty and territorial integrity, apart from the threat posed by radicalism and violent extremism including terrorism and cross-border terrorism.

The fact remains that India itself has no qualms in undermining Turkey. Ankara has been looking to undermine India’s territorial interests, apart from fanning radicalism that directly affects New Delhi. Supporting Greece thus only helps India in hitting back at Ankara.

It is beneficial for India to undermine Turkey’s position in its backyard so that the Erdoğan regime in Ankara doesn’t meddle in India’s internal affairs. Simply put – India and Greece have realised that with reference to Turkey, the enemy of an enemy is a friend.

India and Greece thus seem all set to join hands in a strategic partnership, with two targets in their mind- tackling China’s BRI and Turkey’s belligerence.

Despite Russia’s warnings, Biden is sending the US Navy to Black Sea alongside UK. The repercussions can be grave