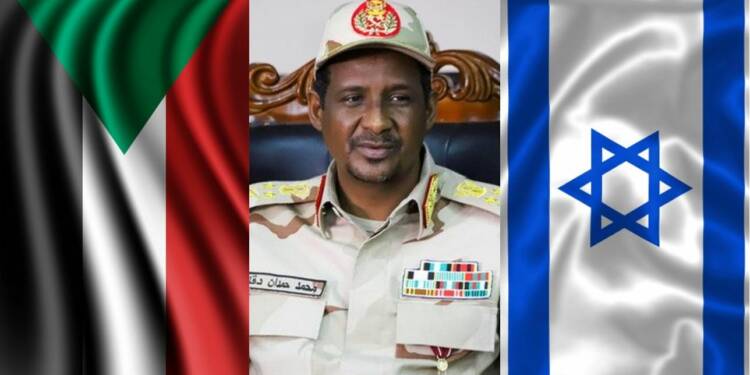 The geostrategic importance of Sudan in the Middle East and North Africa region, and given that it was a tectonic shift when it joined other Arab nations to normalise relations with Israel. Last week after an Israel private jet affiliated with the Mossad spy agency landed in Khartoum. Sources familiar with the flight say Mossad officials met with Gen. Mohamed Hamdan Dagalo, aka Hemetti. The fact that Sudan can be a good strategic location to bolster the Arab fight against Iran’s proxies in Yemen and stop any furthering of influence of Iran in the region makes it a strong ally in all practical deliberations.

Sudan is governed by a transitional civilian-military council, but Israel has interacted almost exclusively with the military, beginning with a meeting between then-Prime Minister Benjamin Netanyahu and Sudan’s governing council head, Gen. Abdel Fatah al-Burhan, 18 months ago. While Burhan pushed the normalization process forward, there were strong reservations on the civilian side, many of which remain to this day. Foreign Minister Mariam al-Mahdi, for example, opposed the abolishing of an Israel boycott law. Other top officials, such as Justice Minister Nasreldin Abdelbari, are more supportive of the normalization process.

In the backdrop of such internal tussle, Israel has been supporting the function which has been working for greater cooperation with the Arab-Israel alliance, in a move to stop the nation from plunging into a civil war and so that it can remain a bulwark for the war against Iran. Earlier last year, after 25 years, Sudan again saw the light of the US’ aid. After being forced into isolation by the Bill Clinton administration, Sudan has once more been free to attract the much-needed western investment in the war-ravaged country. The sudden turn of events comes as the Trump administration was successful in brokering a deal with Sudanese Prime Minister Abdulla Hamdok. The deal requires Sudan to pay $335 million to victims of the attacks on the embassies and USS destroyer Cole, in return for being delisted from Washington’s list of state-sponsors of terrorism (SST).

Read more: Trump’s Sudan card is going to sanitize the region and give China’s BRI ambition another major blow

This was followed by Sudan agreeing late last year to open full diplomatic relations with Israel, making it the third nation in recent months to do so after Bahrain and the United Arab Emirates (UAE). And now in a recent meeting with the U.S. chargé d’affaires in Khartoum, Brian Shukan, senior Sudanese civilian officials said that Israel was engaging only with the military and intelligence services and asked the Biden administration to intervene, as reported by Axios.

Increased interactions between the Israeli government and the Sudanese government’s civilian faction, according to the US, might speed up the normalisation process. State Department officials then conveyed that message to the Israeli Foreign Ministry and prime minister’s office and made clear that the State Department also believes Israel should work with Sudan through civilian channels.

“They didn’t ask us to stop working with the military but asked that we start working with the civilian government, too,” an Israeli official said. The increased interaction of Israel with both sides going ahead will mean that the country’s bonding with the allies will further strengthen. Sudan and Israel have yet to execute a formal diplomatic relationship arrangement. Although the deal has been drafted, Sudanese officials want it to be accepted by the Biden administration and signed in a ceremony in Washington. With this, Sudan becomes the latest nation to join the Arab-Israeli alliance in the war against Iran.