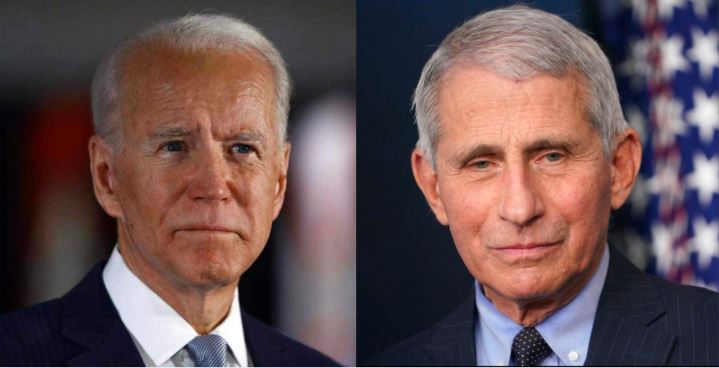 US President Joe Biden, Dr. Anthony Fauci and other prominent actors in the United States government have been perpetually deceiving American citizens on the issue of coronavirus. Issues ranging from its origin to prevention and now spreading mass hysteria just so that they can either use the narrative to further their political goals or as is the case, deflect and avoid blame for their roles in the origin of the virus and keep Big Pharma content.

Their lies have gotten so widespread and careless over time that anyone with even a rudimentary understanding of viruses can easily debunk them. The current “Delta variant” fear peddling has exposed their incompetence, willful propagation of misinformation, and ongoing gaslighting of their own populace to the entire world.

Through Anthony Fauci, the Biden administration is attempting to scare the public about the alleged hazards posed by the “Delta variant” of the virus that causes COVID-19. On Thursday morning, a video from the White House account went viral, which state, “Here’s the deal: The Delta variant is more contagious, it’s deadlier, and it’s spreading quickly around the world – leaving young, unvaccinated people more vulnerable than ever. Please, get vaccinated if you haven’t already. Let’s head off this strain before it’s too late.”

Here’s the deal: The Delta variant is more contagious, it’s deadlier, and it’s spreading quickly around the world – leaving young, unvaccinated people more vulnerable than ever. Please, get vaccinated if you haven’t already. Let’s head off this strain before it’s too late. pic.twitter.com/9gBeRpvCe8

This week, Fauci has been all over the media, talking about the threat of the Delta variant. During a Tuesday press conference, US infectious disease expert Fauci stated that the Delta variant of novel coronavirus, which was initially discovered in India, poses the greatest threat to the US endeavour to eradicate COVID-19 within its borders.

Fauci said, “The transmissibility is unquestionably greater” in the Delta variant than the original variant of COVID-19, adding that “it is associated with an increased disease severity.”

The Delta variant of the novel coronavirus that was first found in India is the greatest threat to the United States’ effort to eradicate COVID-19 in its borders, Dr. Anthony Fauci said https://t.co/Bp1XcMurn3 pic.twitter.com/eaWWrb0YlS

But this time, Fauci and Biden have not been spared. After flip-flopping about the origins of the virus, from claiming to debunk the lab-leak theory to reinstating it, and then getting exposed in a series of emails about the uselessness of masks in preventing the virus, people have had enough and now basic science is debunking claims of both Biden and Fauci on the delta variant as they try to create mass hysteria.

Ivor Cummins, a Biochemical Engineer and Technologist broke down on Twitter, how the Delta Variant previously known as the Indian variant, is nothing more than a “political scariant.”

Even Monica Gandhi, infectious diseases and HIV doctor at UCSF, agreed that the Sars2-Covid virus has reached its mutated peak.

Agree @EricTopol virus can't mutate to be more fit and more virulent. Think we've reached peak fitness. I try to explain in thread here. A silly example I've used -if you evolve a hand on top of your head to grasp more, you can't wear a hat- tradeoffshttps://t.co/kxRJBhSzNe https://t.co/lTVod6R547

Daniel Horowitz, Senior editor at the Blaze shared a post on Twitter, claiming how the new Covid Variant might be less deadly than the other variants.

To begin with, a virus mutating to become both more contagious and lethal defies all grasp of the basic 101 ideas about any virus. When a virus gets more contagious, it spreads more quickly yet does not kill the person who it infects. This is because it has eliminated its host. A virus that grows more lethal spreads slower. Indeed, the strongest information we have on the Delta variant indicates that it is likely to be less lethal than prior mutations. It is also important to keep in mind that we are talking about a condition with an original recovery rate of well over 99 per cent.

Secondly, the idea that human action can “head off” a strain is right out of the pseudoscience playbook of “COVID Zero”. Fauci and the rest of the group aren’t geniuses, but they understand that they can’t stop a virus from spreading. This makes it clear that there are multiple hidden agendas at work, none of which are related to the healthcare of American citizens.

Aside from academic models, there is no concrete evidence that the Delta variant of the virus is any more or less hazardous than any other variant. In fact, the statistics on this mutation demonstrate that there is no reason to be concerned. Yet, based on virtually no real-world facts, the US government is spouting nonsense about a virus.

Besides, COVID cases have dropped 85 per cent in India, where the Delta variant originated, from its high a few weeks ago when it was the dominant strain. Even in the United States, cases have started to decline. Thus the Biden administration’s claims of the Delta Variant being more contagious and deadlier is unfounded and on the face of it, baseless lies.

Moreover, the Biden administration needs something to save their loved stalwart, Anthony Fauci. When the pandemic hit the world, probes on the origins of the virus quickly gained traction, one of those was the lab leak theory. But unlike other theories, this was quickly discarded by Fauci and the Democrat-controlled left-leaning media rallied behind him quickly claiming to debunk the theory brought in by former President Donald Trump. However, after hundreds of correspondence mails between Fauci and his colleagues were made public, and after Fauci’s own admission that the virus could have originated in a lab, it showed that Fauci had pushed a political narrative rather than one based on science.

This has made the people lose trust in him and he is drawing flak and criticism. Moreover, the Biden administration needs to rebuild Fauci’s image as a trusted man of science to rally the people behind them and the Delta Variant presents them with the opportunity. They are doing so by reiterating Fauci’s message, no matter how false it really is.

The Biden administration needed a major package to keep the pharmaceutical giants engaged. Covid has seen the pharma industry reap phenomenal profits, however, with Biden’s major vaccination drive, cases and deaths have sharply declined and the vaccination drive is reaching a standstill.

This means that profit will start to shrink again but the Delta variant has given the opportunity to create mass hysteria once again and get people vaccinated out of fear and keep Big Pharma loyal to the Democrats with the Midterm elections on the horizon.

The woke Biden administration has never been on the side of science, facts, or data since the inception of COVID-19. From the infamous Gates-funded panic models and false Chinese government research that encouraged the globe to go under lockdown indefinitely to the silly mannequin studies regarding the efficacy of masks, this latest Delta variant scaremongering has once again exposed their lies to the world.

In Biden’s America, now the Declaration of Independence, U.S. Constitution, Bill of Rights and founding fathers are racist