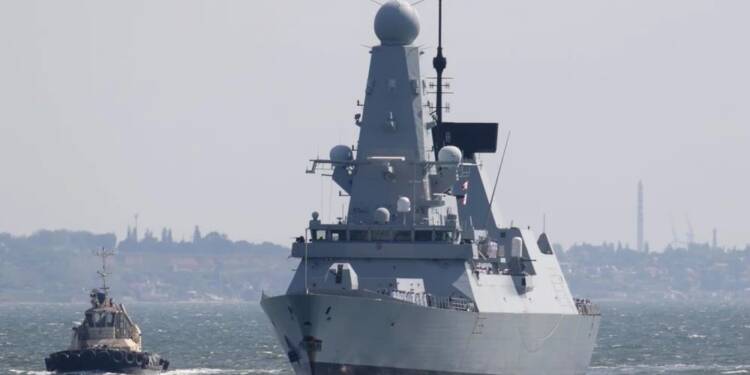 The Biden administration’s unreasonable push to take on Russia has found a partner in Boris Johnson. And in these efforts, he has set foot on the historically most important and desired goal of successive Russian governments, that is, securing the Black Sea and the warm water ports in the Mediterranean Sea.

Last week, Russia warned that it would bomb British vessels if there were any aggressive actions by Britain’s Navy off the coast of Russia-annexed Crimea. Russia has seemingly warned Britain, but Moscow’s message was really aimed at the USA, NATO and Turkey. Russia even summoned the British ambassador in Moscow for a formal scolding. The Kremlin says that the British naval warship breached its territorial waters. Britain however claimed that Russia’s version was inaccurate. It said that no warning shots were fired and that no bombs were dropped in the path of the Royal Navy destroyer (HMS Defender). Meanwhile, Russia’s Deputy Foreign Minister Sergei Ryabkov said, “We can appeal to common sense, demand respect for international law, and if that doesn’t work, we can bomb.”

Read more: Russia’s bomb threat to Britain is a message to Washington and Ankara that Putin will do anything to secure the seas

Less than two weeks after NATO members reaffirmed their commitment to Article 5 – that an assault on one member is an attack on all members, the United Kingdom came dangerously close to putting that pledge to the test. The UK’s HMS Defender purposefully sailed into Crimean territorial waters on its way to Georgia, in a shockingly confrontational move.

According to press accounts, there was a disagreement between the UK defence and foreign ministries about whether to use a heavily armed cruiser to breach Russia’s claimed territorial waters. According to reports, Prime Minister Boris Johnson overruled the more cautious Foreign Office in favour of confrontation.

Russian coast guard vessels ordered the HMS Defender to leave Russian territorial seas, which they accompanied with unusual live cannon fire and bomb drops. After their bluff was called, the UK government did what every government does best: it lied. They stated that the Russians did not fire on a British cruiser. It was a pre-planned Russian military exercise in the area.

Boris Johnson’s government has been exposed lying about not inciting Russia. Unfortunately for the UK government, in their haste to create good propaganda about standing up to Russia, they had a BBC reporter on-board the Defender who spilled the beans: “Yes, the Russian military did issue several warnings”, “Yes, the HMS Defender was buzzed multiple times”, and “Yes, shots were fired in the Defender’s direction”.

Russia is said to have tested the readiness of its air defence systems in Crimea, in an apparent show of force as Ukraine and NATO countries conduct military drills in the Black Sea as part of the Sea Breeze 2021 exercise. In the drills, Russia used roughly 20 warplanes and helicopters, including Su-24M bombers, as well as S-400 and Pantsir surface-to-air missile systems, according to Interfax, citing Russia’s Black Sea fleet.

Russia has demanded that the military exercises, which have taken place 21 times since 1997, be cancelled, and the Russian defence ministry has stated that it will take action if necessary to ensure national security. Sea Breeze 2021, which began on Monday, will span two weeks and will involve around 5,000 military troops from NATO member countries and other transatlantic security alliance allies. Russia on Monday denounced “the scale and aggressiveness” of the drills which “hardly contribute to security in the Black Sea region. The military exercises and Russian testing come at a time when relations between Moscow and Western powers are at an all-time high. Last week, the situation deteriorated further due to a disputed Black Sea incident between Russia and the United Kingdom on June 23.

Russia has now proved its willingness to protect Crimea, which voted in a 2014 referendum to rejoin Russia. The Crimean referendum was precipitated by the US-backed coup in Ukraine. This is referred to as the “unintended consequences” of foreign interventionism. The issue with the United Kingdom, the United States, and its NATO partners is that they believe in their own propaganda and behave accordingly without even making any real effort to reach an understanding.