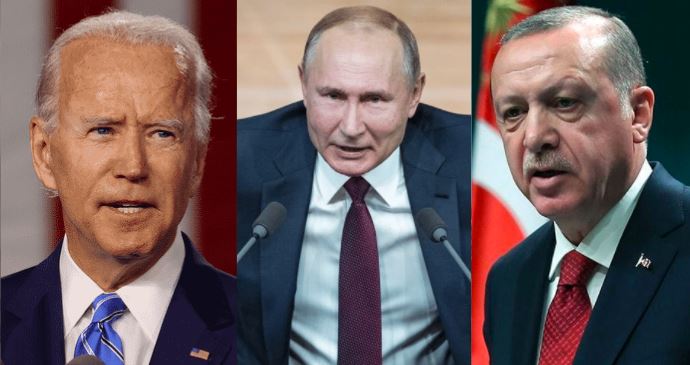 Russian President Vladimir Putin is out to secure the Black Sea and the Mediterranean Sea. So, Moscow has issued a blunt warning to the US and Turkey for this purpose. On Thursday, Russia warned that it would bomb British vessels if there were any aggressive actions by Britain’s Navy off the coast of Russia-annexed Crimea. Russia has seemingly warned Britain, but Moscow’s message was really aimed at the US, NATO and Turkey.

Russia even summoned the British ambassador in Moscow for a formal scolding. The Kremlin says that the British naval warship breached its territorial waters. Britain however claimed that Russia’s version was inaccurate. It said that no warning shots were fired and no bombs dropped in the path of the Royal Navy destroyer Defender.

Meanwhile, Russia’s Deputy Foreign Minister Sergei Ryabkov said, “We can appeal to common sense, demand respect for international law, and if that doesn’t work, we can bomb.”

Warning Britain is merely a means for Putin to convey that US President Joe Biden must immediately desist from instigating Ukraine. Of late, Biden has been constantly trying to provoke Ukraine against Russia, which even led to rising military tensions between Moscow and Kyiv.

Russia itself diffused tensions with Ukraine, by withdrawing its troops from the Ukraine border. But the fact remains that Russia remains concerned about its control over the Crimea region that it annexed in 2014. The US and NATO have been constantly weaponising the issue and Moscow feels that the West is trying to provoke Kyiv over the Crimea controversy.

For Russia, the naval base at Sevastopol in Crimea is its only warm water naval base. Located on the Southwestern tip of Crimea, the Sevastopol naval base allows Russia to access the Black Sea and also pushing extend force into the Mediterranean. This is a geopolitical vantage point for Russia, which it also used to supply aid to the Bashar al-Assad regime throughout the Syrian civil war.

So, Russia’s warning to bomb British naval vessels conveys that if the US or NATO plays the Crimea card again, Putin’s Russia would do anything to secure the strategically crucial region.

Russia’s warning against adverse actions in the waters surrounding the Crimea region also serves as a warning to Ankara. Presently, Russia exercises influence in the Black Sea region and access to the Mediterranean on the basis of the Montreux Convention. The Convention vested equal rights in all Black Sea States, namely Bulgaria, Romania, Ukraine, Russia, and Georgia, when it came to transiting the Turkish Straits of Bosporus and the Dardanelles that connects the Black Sea and the Mediterranean.

Now, Turkey is looking to construct the Istanbul Canal, presumably with the objective of bypassing the Montreux Convention and completely controlling the Bosporus Strait. The Canal, if built, would substantially erase Russia’s freedom of access to the Mediterranean Sea. But by warning Britain, Russia is giving a clear message to Turkey- we won’t tolerate any attempt to reduce our influence in the Balck Sea or access to the Mediterranean Sea.

Russia has thus given a clear message to NATO – don’t mess with Putin, by provoking Ukraine.