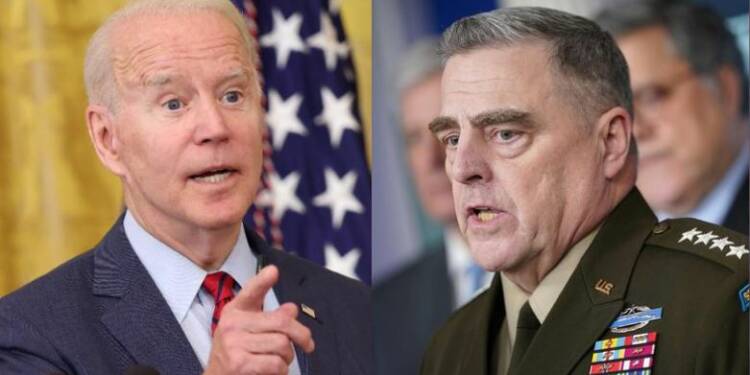 Joe Biden and his administration have gone to an extent where even the armed forces cannot stay neutral and have to time and again prove their loyalty less to the country and more to the Democratic party. The idea is simple: to exist in any domain of the government, one needs to toe the line of Joe Biden and his so-called left-liberal cabal. However, in only one year, Gen. Mark Milley – the man appointed as the nation’s top military leader by former President Donald Trump has found himself at the centre of political firestorms on both ends of the political spectrum.

Gen. Mark Milley has stated repeatedly that he wants the military to stay out of politics. Milley received harsh criticism a year ago when he went across Lafayette Square outside the White House with Trump for a photo-op after federal officials violently removed the area of racial-injustice protesters. The same general was chastised by conservatives last week after dismissing “offensive” GOP senators’ depiction of military commanders as “woke” for investigating the origins of racism.

Retired Gen. Joseph Dunford, Milley’s predecessor, said,  “Gen. Milley did all he can do to adapt to President Trump and appropriately serve the president,” Dunford continued. “Now, Gen. Milley is doing that for President Biden.” This was said after Milley became the target of the right-wing and Trump. But these current and retired officials are revealing that Milley is under a lot of pressure and they even criticised him for politicising the military. However, this just shows that the pressure is so much immense under the Biden administration to follow the woke agenda that even army generals are being forced to take a partisan stand.

While the USA is undergoing such transformation, the world is laughing at them. With the release of a new “woke” animated, fairytale-style recruitment ad earlier this month, the US Army gave the CIA a run for its money. The ad tells the story of a current Army corporal with two moms who married after one of them survived a serious car accident. The Russian social media contrasted the military advertisement with their own and made a laughing stock out of the US advertisement.

While Gen. Milley was a hardcore military personnel under Trump, now he has to propagate woke agenda! He is being forced to do so by the Biden administration. “I think General Milley is trying, not very gracefully, to navigate choppy political waters and keep the military out of the fray,” said Kori Schake, the director of foreign and defense policy at the conservative American Enterprise Institute.

Dunford also lamented the politicisation of the military, which he called a “slippery slope” and said he shares Milley’s concern about the armed forces being caught in the middle of “what is inherently a partisan political dialogue.” “I don’t think any of us are well-served right now if the U.S. military starts to be perceived as a Democrat or Republican institution,” he said, “All of the American people should look at the U.S. military as theirs regardless of what their political persuasion is.”

The professionalism in Army has been one of the most important aspect of the modern militaries and this has helped democracies successfully maintain a largescale, technologically advanced and organised forces in the whole world without making them capable of compromising the political structures of the country. The current developments in the US military and the abject capitulation of the military leadership, forced by the Biden administration can even spell an end to the political system’s status quo in the long run. A similar attempt was made by the Indian National Congress in 2012 in India, quite a few time zones away, but the Indian Army Chief VK Singh went through the trials and tribulations helping India stay afloat as a democracy and not be catapulted to a system where a political party controlled the army for its political benefits, changing the status quo for good.