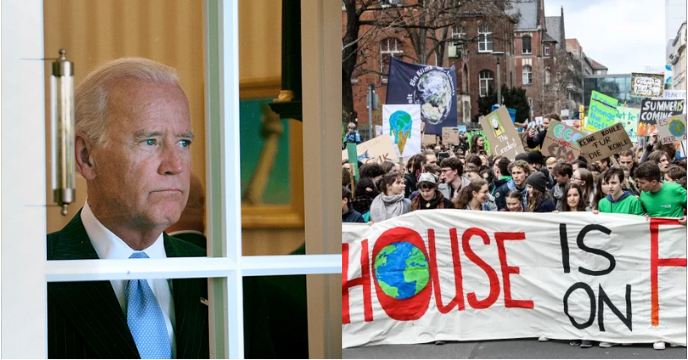 We’ve all grown up hearing about ‘growth’. ‘Development’ and ‘economic advancement’ have been seen as fulcrums to a successful human society. We have gotten this far due to technological advancement and economic upliftment. Wealth generation around the world has helped us reach this stage. Everything is not perfect, but that does not mean we as a society abandon our times and regress into the stone age. But climate vigilantes want you to do that. They want you to give up your homes, cars, clothes, food and begin surviving as a caveman. All of this insanity is being advocated in the name of saving planet earth from climate change.

Another term is now becoming the trend. Shockingly, radical leftists and climate vigilantes are increasingly beginning to speak in favour of ‘degrowth’. According to a new study called, “Socio-economic conditions for satisfying human needs at low energy use,” conducted by a team of European researchers led by University of Leeds sustainability researcher Jefim Vogel, humans need to regress their lifestyle by at least a century, if not more.

In order to “save the planet from catastrophic climate change,” they say Americans will have to cut their energy use by more than 90 percent and families of four should live in housing no larger than 640 square feet. Travel should be limited to between 3,000 to 10,000 miles per person annually. Sounds bizarre, right? Well, this is just the very beginning. Sadly, with the leftists in power in Washington DC, nobody should be surprised if a climate emergency is announced nationally and Americans are forced to follow such bizarre diktats.

Climate vigilantes are also beginning to dictate how much food Americans should consume per day! Food consumption per capita would vary depending on age and other conditions, but the average intake would be 2,100 calories per day. Furthermore, each individual is allocated a new clothing allowance of nine pounds per year, and clothes may be washed 20 times annually. But climate vigilantes aren’t just that awful. They have decided everyone over age the age of 10 be ‘permitted’ a mobile phone and each household can have a laptop too!

The ridiculous study’s co-author Daniel O’Neill, from Leeds’ School of Earth and Environment, while revealing the researches’ far-left agenda, said, “To reduce existing income disparities, governments could raise minimum wages, provide a Universal Basic Income, and introduce a maximum income level. We also need much higher taxes on high incomes, and lower taxes on low incomes.” How did the question of income disparity come in a study focussing on climate vigilantism, you might ask? Well, the geniuses figured that a fairer income distribution is crucial for achieving decent living standards at low energy use.

But here’s where things get rather nasty. According to lead researcher Jefim Vogel, two things that humanity for sure doesn’t need are economic growth or the continued extraction of natural energy resources such as oil, coal, gas, or minerals. Vogel added, “In short, we need to abandon economic growth in affluent countries, scale back resource extraction, and prioritize public services, basic infrastructures, and fair income distributions everywhere. In my view, the most promising and integral vision for the required transformation is the idea of degrowth—it is an idea whose time has come.”

These are not some random researches publishing inconsequential studies. These are people who profoundly impact the thinking and decision-making of Democrats. Unfortunately, with Joe Biden at the helm of affairs, Americans are under constant threat of having their freedoms taken away. Biden had once said, “We have to take combustion engine vehicles off the road as rapidly as we can.” His deputy, Kamala Harris, when asked about changing the dietary guidelines for the sake of climate change, replied with an emphatic “Yes”.

When asked if she would support calls for reducing red meat consumption drastically, Harris said, “Yes, I would.” During his reign, former President Barack Obama was quoted as saying, “We can’t drive our SUVs and eat as much as we want and keep our homes on 72 degrees at all times.” Many climate vigilantes are also romanticising Covid-induced lockdowns.

With lockdowns, these vigilantes argue, mother earth began breathing again. Nature healed itself. Therefore, lockdowns should become the new status quo. Make no mistake, if nobody speaks out against this draconian mindset, of ignoring human suffering and keeping people locked in their homes – leftists and Democrats will very well strip a free nation of all its liberties, all in the name of saving the planet.

Climate vigilantes are trying to turn the clock back on human civilisation. They are trying to undo all that has been achieved by us. Climate change is just an excuse for these maniacs to fulfill their real agenda – of making America an unfree country whose citizens have no liberties.